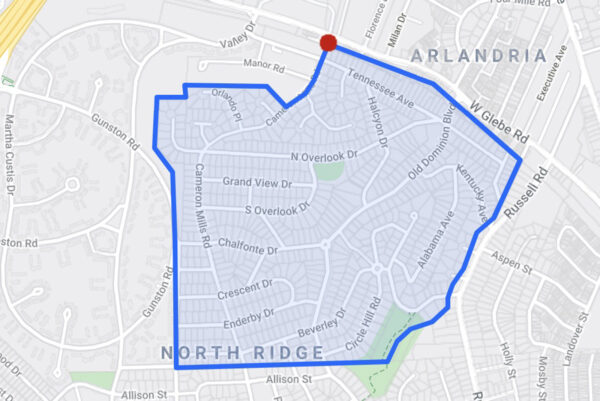 This Neighborhood Spotlight is brought to you by The Seward Group of TTR Sotheby’s International Realty.

Nestled in the hills above Del Ray and Rosemont is a neighborhood pocket called “Beverley Hills,” which encompasses the upper half of the broader neighborhood of North Ridge (portions of ZIP codes 22305 and 22302) in the City of Alexandria.

The boundaries for Beverley Hills are:

Proximity to Washington D.C. (an easy drive from Glebe to 395) makes this a popular neighborhood for folks who need to get in and out of the District on a regular basis. Also, it’s less than a 10-minute drive to both National Airport (DCA) and the Pentagon. It’s just a 10 to 15-minute drive to Shirlington, Ballston, Crystal and Pentagon cities, and Old Town Alexandria — all great options for restaurants, dining and shopping without much traffic along the way!

Beverley Hills is known for its rolling hill topography (not surprising, given its name), which provides stunning views, excellent opportunities for getting the heart rate up on walks and sledding!

“I love when we wake up to a fresh snowfall and the neighbors have blocked off Canyon Drive on each end — families are sledding downhill together, you feel like you are somewhere special.” — Nick Huck, a Beverly Hills resident

In this community, neighbors wave to one another in passing and check in on one another. When Rama and Jay Chauhan (Pullman Place) moved to the neighborhood from a row home in Washington, D.C. in 2017, they were pleasantly surprised with how welcomed their neighbors made them feel and the almost instantaneous support they had from their new community.

“[Our] neighbors feel like family; we can count on them for anything,” Rama said. “And all the walks we have taken during COVID have provided us with an opportunity to meet other folks in the neighborhood — everyone is friendly.”

They also happily pass the time together in local gathering spots, especially The Pit (aka Beverley Park) and Monticello Park. The Pit, renovated in 2017, features a large playground, nature play area, grass and plenty of seating for adults. Rumor has it that sometimes, after the dinner hour, adults may find their way there to relax and hang out with neighbors over a fire. Monticello Park, more of a nature park, is well-known for its bird watching, walking trail and dog run.

The tall, beautiful trees make Beverley Hills feel like a forest outside of the city. Members of the community have a strong appreciation and connection to the natural growth of wildlife in the neighborhood.

“The trees and flowers are something I feel like the neighborhood, in general, cares for,” Huck said. “I was just talking to two neighbors, and they told me about how the flowers growing in that yard were shared from another neighbor, who got them from yet another. In fact, some of our azaleas are from neighbors who shared them with our property.”

While Beverley Hills does not host any restaurants within the neighborhood boundaries, its proximity to Del Ray provides plenty of nearby dining options, whether that’s take-out or dining on-site. Community members join together via the North Ridge Citizen’s Association, which hosts regular meetings and helps organize community missions, including Tree Canopy, Adopt-a-Park and Wheel Day. 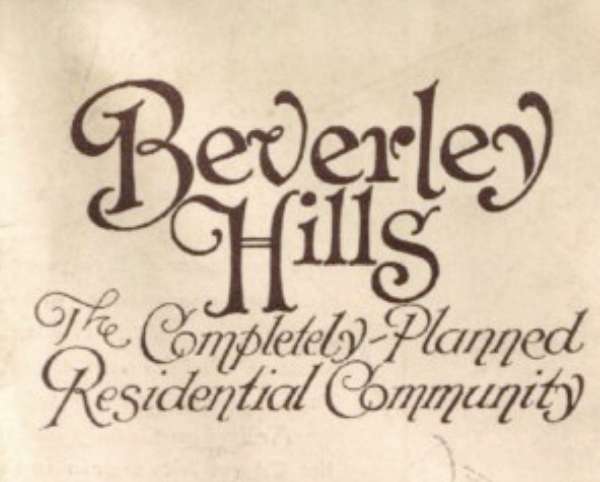 Thanks to local author Blake Patterson and his blog Nostalgic Virginian, we found an incredible brochure from the 1930s when the community was planned and developed. We were pleasantly surprised to hear that it hasn’t veered too far from its roots. The developers advertised traits such as its “rolling character,” “convenient location and natural, park-like beauty,” and, of course, the views of the Washington Monument… all of which are ways we describe Beverley Hills to this day! 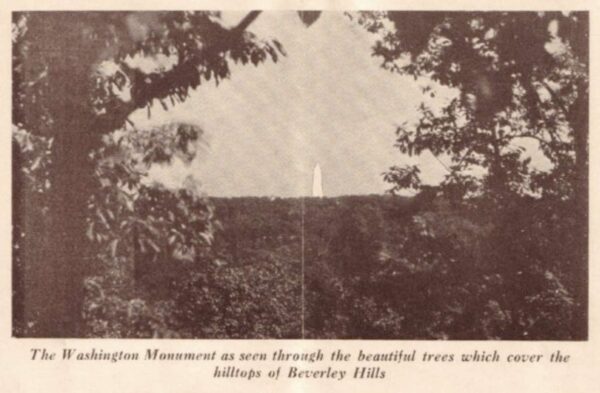 You can also learn about the community’s history through a book published in 1981 by the North Ridge Citizen’s Association called North Ridge Lore. A few copies were circling on Amazon at the time this article was published.

Finally, journalist Sue Anne Pressley wrote a fantastic neighborhood spotlight herself published on June 20, 1992, in the Washington Post. Notably, her tagline was the same as what we came up with nearly 20 years later — not 90210. Ms. Pressley’s article is filled with even more historical information on the community, including tidbits such as 506 N. Overlook was a hospital during the Civil War, and Richard Nixon was a resident when he was still a congressman.

In recent years, we’ve seen some lots turned over into new construction, but generally speaking, most homeowners here choose to work within the existing footprint of the original home they chose. That means you’ll see lots of neat internal renovations and remodels along with the occasional large (or even small) addition to make better use of the lot size.

According to Bright MLS, as of March 30, 2021, this desirable neighborhood has been selling quickly with the majority of homes under contract in less than a week. Here are some additional statistics on the average home sold in the past six months in Beverley Hills:

If you have any questions about Beverly Hills real estate, please reach out to The Seward Group at TTR Sotheby’s International Realty on South Washington Street.

If you have a question or would like to set up an appointment with one of our agents, please email [email protected], call 703-298-0562 or visit The Seward Group website.

About The Seward Group: We are award-winning real estate agents with TTR Sotheby’s International Realty. Lyssa Seward, Brittanie DeChino, Anita Edwards, Melody Abella, Laura Catron and Gina Wimpey make up our team. We offer our clients Full-Spectrum Concierge Real Estate Service at all price points, assisting with every step of the process from beginning to end. We are licensed in Virginia, D.C. and Maryland with TTR Sotheby’s International Realty in Old Town Alexandria.