An analysis of the recent ALXnow poll on the Alexandria mayoral race shows hundreds of apparently fraudulent votes cast.

In response to allegations that one candidate seemed to benefit from rapid repeat voting, ALXnow conducted an IP address analysis of the votes.

Our analysis showed 167 votes cast from non-U.S. IP addresses, with all but five cast for Allison Silberberg.

Another 231 votes came from one particular IP address combination, with a rapidity that suggests repeat voting. While all three candidates received votes within this group, the vast majority were for Silberberg.

No other significant irregularities were observed.

Silberberg touted her apparent edge in the ALXnow poll in a social media post Sunday. There is no indication that she would have known about the apparently fraudulent votes.

Silberberg told us said that at no time does she condone cheating in voting or online polling. 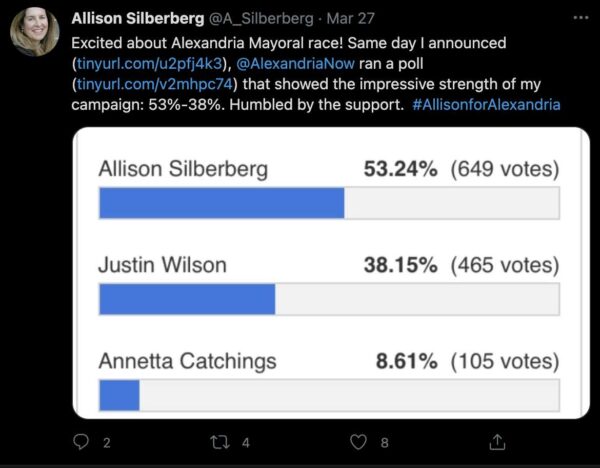 When the 398 suspicious votes described above were removed from the more than 1,200 cast, the results of the poll are starkly different:

While not intended to be a scientific poll, ALXnow regrets that it was seemingly exploited in order to mislead Alexandria voters. A note will be appended to the original poll post, linking to this article.