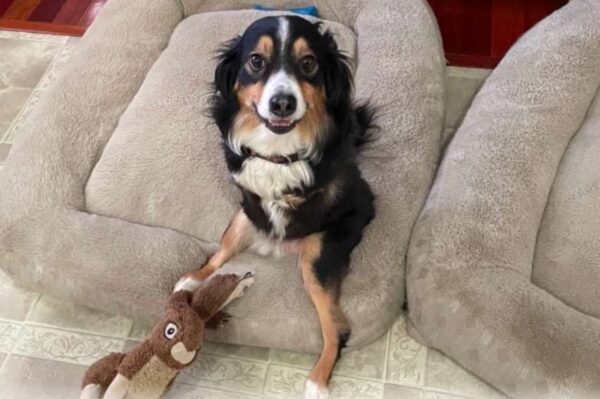 Tobi needs a new set of wheels. The five-year-old Mini-Australian Shepherd was born without front legs, and his Alexandria owner has launched a GoFundMe campaign so that he can get a $2,350 wheelchair.

Alexandria resident Paige Bradford adopted Tobi from The Humane Society of North Texas in 2018. She’s an elementary school special education teacher in Arlington, and said that Tobi is also an emotional support animal.

“Tobi’s an active dog,” Bradford told ALXnow. “He loves people, and I actually don’t think he knows that he’s a dog.”

Tobi has been using a wheelchair that was outfitted for him in Texas, but it is ill-fitting and his spine is starting to deteriorate, Bradford said.

“Toby has been a nice bridge in terms of helping kids to see that being different isn’t bad,” Bradford said. “Now in virtual learning, Tobi is like another member of my class.”

Bradford found Bionic Pets, a Sterling, Virginia-based company that makes custom prosthetic devices for pets. Tobi has since been outfitted for a $2,350 brace and a wheelchair.

Bradford launched the GoFundMe campaign on Tuesday (March 23) and has raised more than $500. She said that any monies raised in excess of the amount she needs for the cart will be donated to Bionic Pets to help another animal.

“This cart would would help to give him more stability,” she said. “It’s custom made to him, and it would account for the fact that his chest cavity is crooked. This would have padding in all the right spots, so there isn’t any rubbing or irritation and it’s guaranteed for life.”