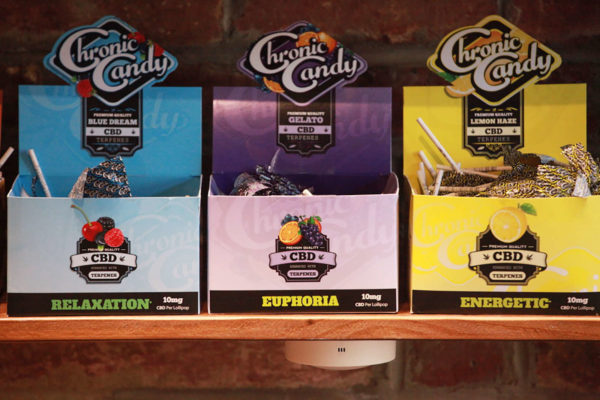 Feeling stressed? Momma’s Hemp at 1314 King Street carries $2 lollipops infused with CBD that are supposed to calm you down, give you energy, make you creative and focused.

Jennifer Bright and her eldest son, Devin Pullen, opened the shop on Tuesday. The pair also opened a location in their hometown of Culpeper, Virginia, in 2019.

“Old Town is kind of like coming to a foreign country, but I’m getting used to it,” Bright told ALXnow.

Before going into business for themselves, Bright said she was wrongly fired from her job as a customer service representative for a retail store in Culpeper for bringing in CBD edibles to the office. The products won’t get customers high since CBD, or cannabidiol, is a completely legal cousin of the marijuana plant and has no psychoactive effects.

“I wish we had opened my business sooner, but being the single mom of four boys, I depended on that money and just felt comfortable in that position,” Bright said. “I feel like it happened for a reason, even though I didn’t understand it at the time. But now that I look back at it, it inspired us to do this, to push ourselves.”

Bright said that Pullen was experiencing anxiety, and that prescription medication wasn’t helping. So, they ventured into CBD. Products at the store include coffee, teas, candies, lotions, bath bombs and vapor cartridges.

“We’ve been watching him crawl out of the shell that he’d been in for quite some time,” Bright said. “It’s wholistic healing, and I’m using it, too. I’m not on any heavy medication. I feel better now than I have in my entire life. It just provides a great body relaxation. If you deal with anxiety or have pain, it’s gonna just help take that edge off. ”

Bright said that she and her son are waiting for marijuana to get legalized in Virginia so that they can sell it.

“That’s kind of what we’re waiting for,” she said. “The plan is to keep these two open, and then open more locations down the road.”