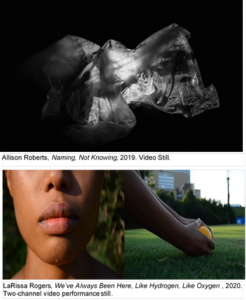 A new exhibit at the Torpedo Factory Art Center set to launch tomorrow aims to blend the virtual and in-person tourism that’s likely to be a cornerstone for local galleries as the pandemic rages on.

The series is called Movements, Moments and features six filmed movement-based performances as part of a larger gallery featuring 20 artists.

The series also incorporates elements of national dialogue over the last year, from protests over racial inequality to feelings of isolation brought about by coronavirus.

LaRissa Roger’s filmed performance piece ‘We’ve Always Been Here, Like Hydrogen, Like Oxygen’ is a two-channel video depicting Roger’s rubbing her body with an orange. The fruit recalls the murder of Latasha Harlins, whose death after being wrongfully accused of stealing a bottle of orange juice inspired the 1992 LA riots. The work addresses what it is to inhabit the world in the body of a black woman. She uses the orange as symbolism of being pasteurized, commodified, and sold for consumption. This motion and action of cleansing herself is an act of self-care and resistance.

The exhibit is scheduled to launch with a virtual reception via Facebook Live tomorrow, Feb. 12 at 7 p.m. The exhibit will be open Wednesday-Sunday from 10 a.m.-6 p.m. with limited visitor capacity to allow for social distancing. The gallery is on view through Sunday, March 7.