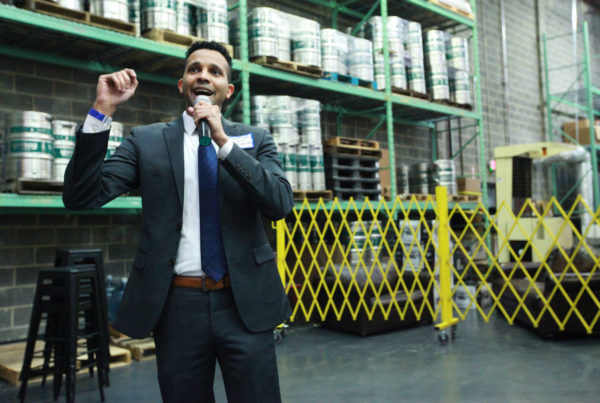 Alexandria City Councilman Mo Seifeldein is running for mayor and he is not seeking reelection to Council. He tells us that he is planning to make a formal announcement in the next couple of weeks.

Seifeldein called Mayor Justin Wilson on Wednesday night to tell him that he would be his opponent, although Wilson was unclear when he spoke with ALXnow as to whether Seifeldein will challenge him in the Democratic primary or the general election.

“I am running for mayor,” Seifeldein confirmed to ALXnow on Wednesday night. “I’m running to represent all Alexandrians, and make sure everyone is heard and challenging the status quo. Mr. Wilson is a fine gentleman. I have no quarrel with him.”

The 37-year-old Seifeldein has not yet formally submitted the 125 signatures to the city’s registrar of voters, and there is question as to his eligibility to run. He was first elected in 2018, and then got a job as a trial attorney for the U.S. Department of Labor in January 2020, and the registrar referred ALXnow to the U.S. Office of Special Counsel in regard to investigating Hatch Act violations that prohibit government employees from holding public office.

Seifeldein, who would not get specific, said he has it on “good authority” that he can run, and that local politics is not partisan on the ballot.

“I am running against Wilson in the Democratic internal primary (on June 8), which is nonpartisan,” Seifeldein said. “The general election is something to worry about later, which is also nonpartisan.”

Clarence Tong, the chair of the Alexandria Democratic Committee, said that the only nonpartisan elections in the city are for the school board. He also said that any candidates interested in seeking the democratic nomination can file between March 8 and March 25.

Wilson, who works for Amtrak for his day job, said that he’s excited to discuss issues facing the city with his opponent. Amtrak is owned by the federal government, although its employees are not government employees.

“I’m excited about the opportunity to discuss the important challenges facing our community, the successes of the past two years and my vision for an Alexandria that can thrive in a changing region,” Wilson said. “My focus will continue to be as it always has been, investing in our kids, our infrastructure and the strength of our economy.”

Seifeldein wants the city to conduct an infrastructure review throughout to look at public safety issues, such as waterfront flooding. He also said that city’s West End is in dire need of retail and residential development.

“Mayor Wilson is a formidable opponent,” Seifeldein said. “I am sure it’s going to be an interesting race. As I told Mr. Wilson, I intend to run a race based on the facts. We can agree to disagree in a cordial manner, and he understands. He challenged a sitting incumbent mayor, too.”