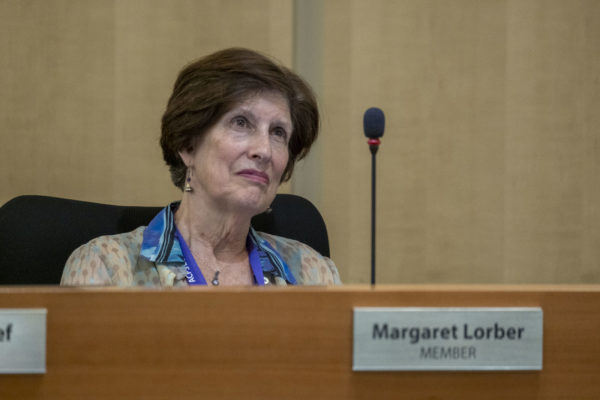 School Board member Margaret Lorber has apologized for comments she made last week over the cautious reopening of public schools in the city during the pandemic.

“I was just amazed at the level of venom that I received in some of the emails,” Lorber said in a school board retreat on Tuesday night. “Everything gets put on social media so whatever you have said, gets amplified and misinterpreted 50 different ways. ”

There have been calls for Lorber’s resignation in the wake of her comments supporting the cautious reopening of schools by Superintendent Gregory Hutchings, Jr. After Hutchings told the Board last week that the planned reopening schools to some students on Jan. 19 was not a certainty, Lorber approved of his approach and said, “Do you want your child to be alive or educated?”

Lorber made her brief apology as the board participated in a conversation on the Jan. 6 siege at the U.S. Capitol. Nearly all the Board members admitted that systemic racism exists, with Hutchings’ comments that he was not surprised, but saddened by the event, echoed by the board.

“I guess I’ll take this opportunity to just apologize,” Lorber said. “One of the things I’m feeling is depressed and embarrassed currently for my colleagues, because in a way I feel like some of the letters that came to me made it sound like they thought I read through a batch what our School Board thinks.”

School Board Vice Chair Veronica Nolan extended a “virtual hug” to Lorber, and said she had no doubt as to Lorber’s commitment to Alexandria’s children.

During the conversation, Board member Ramee Gentry said that the school system is now challenged with teaching children how to find truth in an era consumed by misinformation.

“This is about critical thinking,” Gentry said. “We need to teach children how to feel through this very complicated world, with all this information being thrown at them from all of these different sources, and we have to give them the critical thinking skills to understand what is true and what is a lie so that they can then make decisions.”