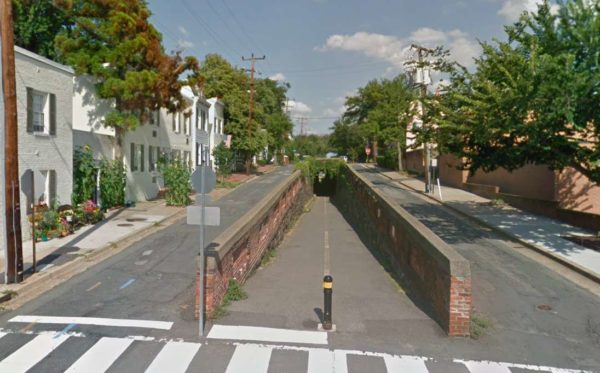 Any Alexandrian who has gone up and down the waterfront has passed, or even walked through, the Wilkes Street Tunnel.

The tunnel’s ties to the area’s industrial history were recently documented in the online local history repository Atlas Obscura.

“At the corner of Wilkes Street and Royal Street is the entrance to a former railroad tunnel that belonged to Orange & Alexandria Railroad completed in 1856,” contributor blimpcaptain wrote. “It was used in both the Civil War and World War I as a major connector between Washington, D.C., and Richmond, Virginia.”

The train tracks were removed in 1975 and underwent a refurbishment in 2007-2008 to become a pedestrian passage.

“The most intriguing thing about the tunnel is its design and appearance,” blimpcaptain wrote. “The long entrance path is on a downward slope that slices right down the middle of Wilkes Street, which forms an upward slope that brackets the tunnel on either side, creating a neat optical effect.”

Blimpcaptain also notes that the tunnel could be haunted, but doesn’t go into further detail. An Alexandria Gazette article from 1909, quoted by Old Town Crier in a 2015 article on local hauntings, said that roughly 44 years before the article — so 1865 — there was a murder that could be the cause of the “cold spots” reported in the tunnel.

The murder was committed between five and six o’clock on a bright summer evening. The party or parties who committed the crime were never identified. The victim wore new clothes, but there is every reason to suppose he had enlisted in order to procure several hundred dollars bounty. He had been lured into the tunnel, where he was murdered and robbed. A short time before this murder some fiends who had murdered a man placed his dead body upon the track at the western end of the tunnel. The head of the corpse had been placed on the rail and a passing train crushed it.

Atlas Obscura is an online magazine with community-written posts about obscure bits of local history, specializing in hidden or mysterious locales.