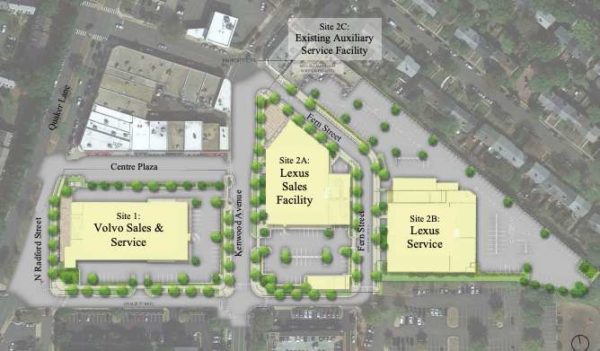 The Lindsay Cadillac dealership (1511 N. Quaker Lane) straddling Kenwood Avenue near North Ridge could soon be demolished and rebuilt as a new Volvo and Lexus dealership — with a few additional public improvements.

In an application headed to the Planning Commission on Tuesday, Jan. 5, the Lindsay Company is proposing to replace the existing lot and buildings with three new buildings along with surface, underground, and rooftop parking decks. The buildings will replace a dealership built in 1949 and an office building built in 1967.

“The Lindsay Family has been operating car dealerships in the community since the 1960s,” the company said in the application. “The existing dealerships have created millions of dollars in tax revenue for the City of Alexandria, and the Lindsay’s have been outstanding corporate citizens through their relationship with the surrounding neighborhood and through their participation in and contribution charitable endeavors throughout the City and beyond.”

As part of the application, the company is offering several improvements to the area, including:

The lot will also include publicly accessible electric vehicle charging.