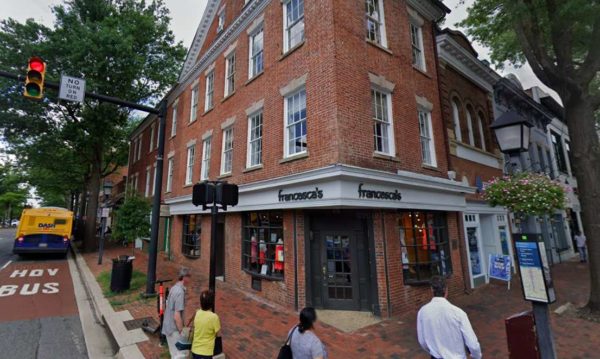 Women’s clothing and jewelry store Francesca’s (631 King Street) has permanently closed its store at the intersection of King Street and Washington Street.

The store replaced sushi restaurant BumbleFish in 2013. The store is one of 140 across the country being closed as the company files for bankruptcy. The Francesca’s was on the ground floor of the Alfriend Building — constructed in the late 18th century.

Sadly, another one bites the dust. Francesca’s at King and Wash. #retailpocalypse #alexandriava #oldtownalexandria At least we still have scooters…. pic.twitter.com/JSvvzXiJLB

On Twitter, locals noted that the business is one of a handful of stores that have closed near the King Street and Washington Street intersection — leaving the block “looking grim.” Nearby women’s clothing store LOFT also closed within the last month.

That block is looking grim. North side going east – Francesca’s, Walgreens, Java Grill, and La Tasca – all closed in the last year.