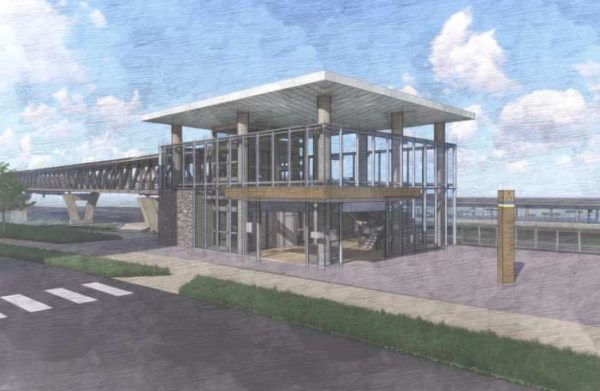 While a poll showed most ALXnow readers don’t need convincing, Virginia Tech is still pulling out all the stops as it works to get its name added to the Potomac Yard Metro station.

Virginia Tech is in the process of creating Innovation Campus, a new 1 million-square-foot campus at the northern end of Potomac Yard planned to have planned to have around 750 students by the time its completed in ten years. The school has pushed to have the nearby Metro station named “Potomac Yard — VT” to highlight the campus.

Adding Virginia Tech to the primary part of the station name was approved by the City Council and is currently pending review by WMATA.

David Baker, assistant director of Government and Community Relations at Virginia Tech, spoke with ALXnow about the proposal to add VT to the station’s name.

ALXnow: What would you say about the name to those who might be wary of adding Virginia Tech’s initials to the Metro station in the way they might be concerned about adding a corporation’s name?

Baker: As you may know, Metro doesn’t allow corporate entities. What they do allow is universities to have their names included on Metro stations. There are ten universities across the region included on the Metro map.

Our new campus will be less than half a mile — less than a quarter of a mile — from the station. It will be our flagship campus on Northern Virginia. Our obligation to the commonwealth is that we graduate 750 masters students annually

For us to do that, ti’s going to take thousands of students in the pipeline. This is not some sideshow satellite campus, this is a big deal. The state has invested substantial money into this project. It was a key driver for Amazon’s decision, but it’s also a symbol of how the District, Maryland and Virginia came together for the first time to pursue one of these huge economic windfall opportunities. The Innovation Campus is a core component of that.

We’re hearing from leaders that it’s access to talent that’s going to attract the next Amazon.

ALXnow: What about the concern about wanting some permanence for the name? After all, Metro is also now having to remove UVA’s name from the West Falls Church Metro station.

Baker: Virginia Tech has actually bought out UVAs. We are simultaneously going through a process called PPEA with Hick Construction to build a large new facility at the West Falls Church Metro station, focused on smart construction and architecture.

Virginia Tech is investing in that campus as well. UVA was there for 25 years, it made sense at the time. The thing about universities: we talk in centuries, not decades. When universities make investments in campuses, it’s a much longer time frame. That’s why there’s an understanding of that commitment, that’s why the City of Alexandria endorsed adding the name to the station. They see a long term benefit. Looking at the other universities on the Metro stations… that’s as rock solid as we can get

George Mason is the only university in the system that has their name on two stations — as primary on Virginia Square and as a secondary name on Vienna. Their main campus is nowhere close, certainly not within a half-mile. The names already on there are being grandfathered. What we’re saying is “use the George Mason model, keep our name as secondary [at West Falls Church] — but because this is our flagship that’s worthy of the primary name Potomac Yard-VT.