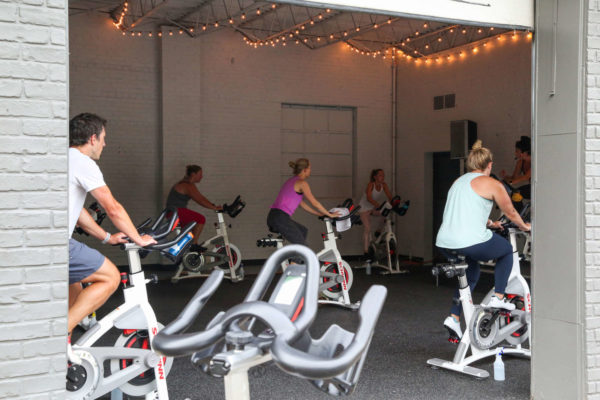 Virtual spin classes don’t work too well for Del Ray’s Ascend Cycle. Owner Kathryn Zajac says that her six-year-old indoor cycling and strength training studio is all about making an in-person connection, and that her expanded garage space in a former auto repair shop helps fit the bill.

“We have 11 bikes under cover, and any day it isn’t going to rain we have an additional four bikes,” Zajac told ALXnow. “There’s a lot of competition in the virtual space, so we opened in the garage to make people feel safe during this time and a part of a community.”

Ascend Cycle moved from her small studio at 2413 Mount Vernon Avenue in July to the 1,800 square foot building at 2903 Mount Vernon Avenue. The former home to Anthony’s Auto Center was built in the 1940s, and currently holds 11 socially distanced exercise bikes in an outdoor studio. If it’s not raining, Ascend has four additional bikes that can be put in the parking lot.

Zajac opened the studio as a pop-up, but the property owner abandoned redeveloping the site and Zajac expects to be there for at least a year.

“We used to pack in 25 people in an 800 square foot space,” Zajac said. “My commitment to the garage is really trying to evolve where I think fitness might have to go with more space between people.” 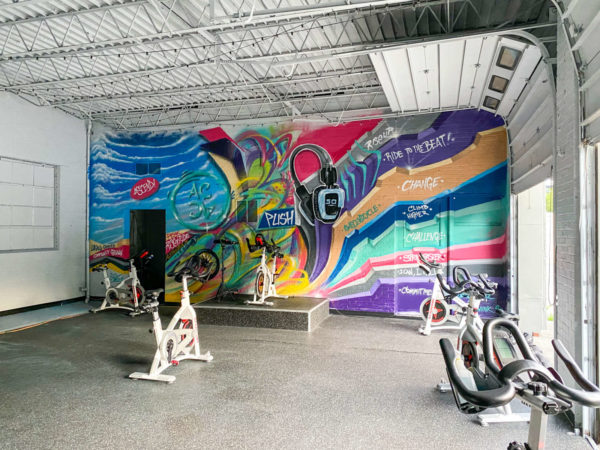 The 45-minute workouts have music playlists curated by the instructor, and riders can go upward of 15 miles.

“I find that riding hard on the bike and just turning up the music helps you deal with stress in a healthy way,” Zajac said. “You have to monitor how many social interactions you have, and there’s a lot of frustration anxiety. Exercise helps to combat those things.”

“I think there’s so much going on with the pandemic, with the political scene, with everything, that there are still these strong small businesses struggling to survive every day,” she said. “I tell them folks all the time when I’m teaching, thank you for being here. You guys are keeping the business alive.”