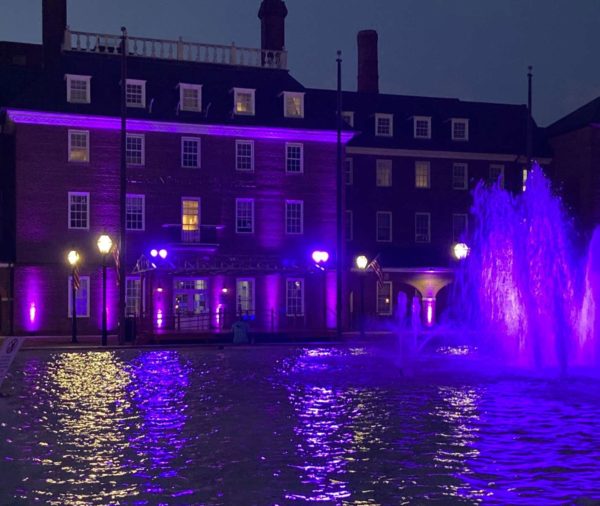 October is National Domestic Violence Awareness Month, and all next month, the Alexandria Department of Community and Human Services will light up City Hall (301 King Street) purple in honor of domestic violence victims.

“It’s really beautiful to see,” said City Hall engineer Matt Wise. “We lit up City Hall in purple at the end of August through September 1 to raise awareness of substance use disorders, and next month we’re going to honor and raise awareness for domestic violence victims.”

Last year, there was a candlelight vigil at Market Square to honor the 22 people in Alexandria who have lost their lives to acts of domestic violence since the mid-2000s. The annual event is hosted by the city’s Domestic Violence Intervention Project, and is being put off this year because of the pandemic.

“COVID-19 is having a dramatic effect on our daily lives,” states the city’s Domestic Violence Program. “During a crisis like this, the risk for intimate partner and domestic violence increases and may happen at higher rates. Survivors are also at an increased risk for violence and may need additional service.”

City Hall was previously lit up at the end of August in recognition of International Opioid Awareness Day.

To raise awareness and understanding of addiction prevention and treatment on International Overdose Awareness Day,…

END_OF_DOCUMENT_TOKEN_TO_BE_REPLACED

More Stories
Did You Know: There’s An Old Bell in the Alexandria City Hall Clock TowerJust Listed in Alexandria