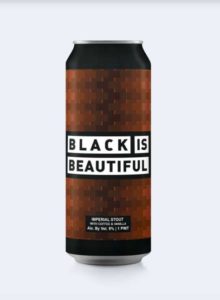 There will soon be a new beer in town.

On August 28, to commemorate the anniversary of Martin Luther King Jr’s “I Have A Dream” speech on the National Mall in 1963, a group of local entrepreneurs will unveil Rocket Frog’s newest socially conscious creation — “BLACK IS BEAUTIFUL” beer.

The 9% alcohol imperial stout includes vanilla from Goodies Frozen Custard and Treats and coffee from Swings Coffee Roasters, and will be unveiled at The Loop coworking space (215 N. Payne Street) in Old Town from 12-6 p.m.

Proceeds from the event will go to Black Lives Matter.

Tickets cost $15, which gets you a can of BLACK IS BEAUTIFUL beer, two hours to hang out at the event, and a souvenir glass. Food trucks will also be parked at the venue, and there will be a DJ.

Brandon Byrd, owner of Goodies, came up with the idea.

City Councilman John Taylor Chapman was on-hand at The Loop to discuss the event.

“As I heard the name, I was like, ‘Okay, this is going to be interesting,'” Chapman said. “You don’t always see organizations being so socially conscious. I think that’s really what I appreciate.”

David Hartogs, the owner of Rocket Frog, said that he’s made 350 souvenir glasses for the event. He also said that $12 of the $15 admission will go straight to BLM and that he is looking for a distributor to sell the beer in Alexandria.

“There’s nothing better than sitting down with different people and having beer and just talking about life, so that’s kind of where we come at with with our philosophy about who we are as a company,” Hartogs said.

Christopher Campagna recently opened The Loop, and this will be his first event.

“We’ve got a big, brand new warehouse space, and a big parking lot, so we can have a gathering and observe social distancing,” Campagna said.

A 1 BD/1 BA condo at the Jamieson with floor-to-ceiling windows is Today’s Listing of the Day.

Melanie Kay-Wyatt says that she lives by one word — impact. With just a month under her belt as interim superintendent of Alexandria City Public Schools, she’s got a mountain…

Landmark Mall is gone, so what’s next? A representative from developer Foulger-Pratt spoke at the Eisenhower West Landmark Van Dorn Implementation Advisory Group earlier this week to provide a bird’s…

Get your sneakers and sweats ready, because Alexandria nonprofit ALIVE! is hosting its 41st annual StepALIVE! Walkathon in Old Town on Sunday, October 16. There are already 33 walking teams…