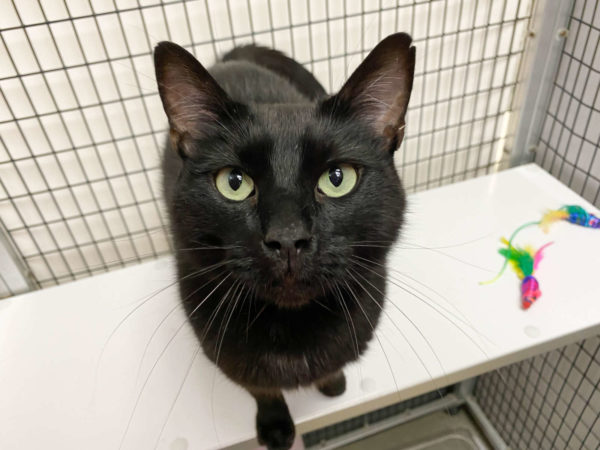 Don’t let his intimidating gaze and sleek demeanor fool you, staff at the Animal Welfare League of Alexandria say that Dana is a love bug.

“While young and active, Dana is also an affectionate love bug,” said Audrey Alessi, a spokesperson for the AWLA. “Crouch down to greet him and he’ll put his paws on your lap so you can more easily pet him.”

Dana is a three-year-old black domestic short hair, which has gotten him the nickname house-panther at the AWLA.

“He lives up to the title too,” Alessi said. “Dana loves to play, especially with a feather toy, which he carries in his mouth after catching. It’s adorable to watch.”

Alessi said that Dana is notable bold and outgoing.

“He will rush forward to meet new friends,” Alessi said, “whether they’re meeting him in-person or over a Zoom meeting.”

Anyone interested in meeting Dana, can learn more about the adoption appointment process at the Animal Welfare League of Alexandria at AlexandriaAnimals.org/Adopt-By-Appointment.