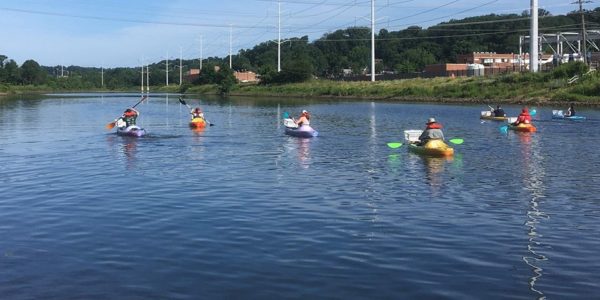 After getting a late initial start, the Four Mile Run Conservatory Foundation is back on the water and looking for volunteers to help kayak along Alexandria’s northern border and do some cleaning.

The organization has had three kayak cleanups so far this season, starting in late June. Upcoming sessions are planned for Wednesday, July 29 at 4 p.m., and on both  Saturday, August 1 and Sunday, August 16, at 9 a.m.

“It’s been great,” said Kurt Moser, President of Four Mile Run Conservatory Foundation. “Kayak cleanups are naturally distanced. You can’t really be that close, and we’re taking precautions on-shore and limiting the size of the groups.”

The kayak cleanups are limited to groups of ten. Moser said those spots fill up quickly but as of today (Tuesday) there were still open spots on the newly announced upcoming cleanups. Moser said the Four Mile Run Conservatory Foundation has kayaks and all the necessary equipment available for anyone to come and use, though some prefer to use their own kayaks.

June and July are late in the season for theses cleanups to start, Moser said. The crews typically start kayaking along Four Mile Run cleaning in April or May, but Moser said it wasn’t clear at that point what was allowable.

As far as the impact of coronavirus on litter in the stream, Moser said it’s too soon to tell.

“We’re not finding as much as last year, but not sure if that’s a reflection of any substantial change,” Moser said. “Just the timing of things, like when we get big rainstorms, we see variability with that.”

But while it’s not clear what liter impact will be on Four Mile Run, Moser said the silver-lining to the pandemic has been an upsurge in public use and enjoyment of the park.

“The neat thing to see this year, and what’s been the silver lining of having had people staying at home and not doing their regular routine, is a lot of people are starting to realize there really is a great park resource at lower Four Mile Run,” Moser said. “People who didn’t realize the park was there or that there was a big loop trail, a lot of people didn’t know about that. The park has seen a tremendous uptick in usage. I view that as very good, it means more people care about the place.”

Moser said that could also come with some negative consequences, like more informal trails through parts of the park, but he said those were “okay problems” for an urban park to have.

“People are using the space and it’s proving their value to them,” Moser said. “It’s more than demonstrated its value. People use it a lot to get fresh air and settle their minds.”