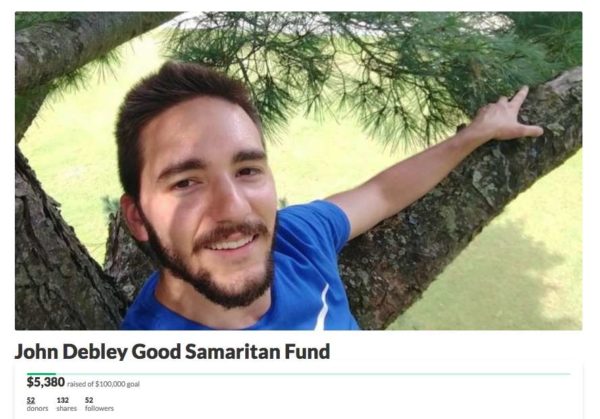 A GoFundMe campaign has started to help an auto technician who was severely injured in a car crash in the 100 block of N. Telegraph Road on June 12.

John Debley, who is an automotive technician for Land Rover Alexandria, stopped on the side of the road to help change the tire of a Toyota Sienna van that was involved a minor crash. While changing the tire, a black 2010 Nissan Rogue crashed into his Toyota and pinned Debley.

“While changing the tire, another vehicle was not paying attention and crashed into the first vehicle, causing a chain reaction ending in the loss of his leg from the knee down and injury to his eye socket,” states the GoFundMe campaign. “The incredible work of the surgeons has saved his life, however now the work begins on determining what type of prosthesis will work best for him. This will be a long tough road but John is a positive person with the heart of a lion.”

The victim “was assisting the two with the tire as he had been involved in the initial crash with the van,” and was caught between the two vehicles when the Nissan ran into the bumper of the truck,” notes a search warrant affidavit.

The Nissan was disabled by the incident with severe damage.

Debley and the driver of the Nissan were transported to Inova Fairfax Hospital, and the case is being handled by the Crash Reconstruction Team, according to Alexandria Police spokesman Lt. Courtney Ballantine.

“It remains under investigation, and at this point, there have been no charges,” Ballantine told ALXnow.

Please read and consider any type of donation for this Jonathan Debley an invaluable member of our Land Rover Alexandria Team. Fell free to share too!:)