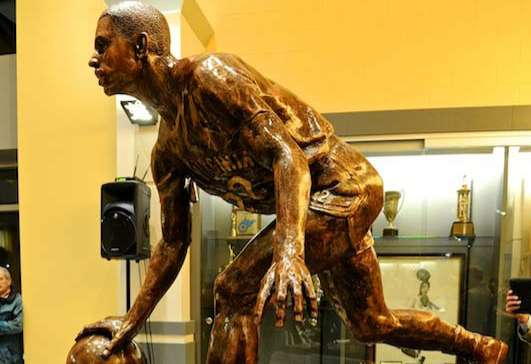 This fall, a statue of Alexandria’s Earl Lloyd, the first Black man to play basketball in the National Basketball Association, will be unveiled in the African American Hall of Fame inside Charles Houston Recreation Center.

The City Council approved the gift from Lloyd’s wife, Charlita Lloyd, at its meeting on Tuesday night. The statue, which is three feet wide, nine feet long and six feet tall, is exactly like the statue of Lloyd dedicated at the Naismith Memorial Basketball Hall of Fame in 2003.

“It’s an extraordinary gift, and I think it would help a lot of young men and women to be inspired,” said City Councilwoman Del Pepper.

Lloyd, who was affectionately known as “The Big Cat,” was born in Alexandria in 1928 and graduated from Parker Gray High School before becoming an All-American basketball player at West Virginia State University and joining the NBA in 1955. He won a national championship five years later with the Syracuse Nationals.

Mayor Justin Wilson said the city appreciated the contribution from the Lloyd family.

“We certainly thank them for their generosity and for the opportunity to recognize one of Alexandria’s native sons,” Wilson said.

The city is currently working to unveil the statue at Charles Houston Recreation center on October 31, which is the date that Lloyd played his first official NBA game.