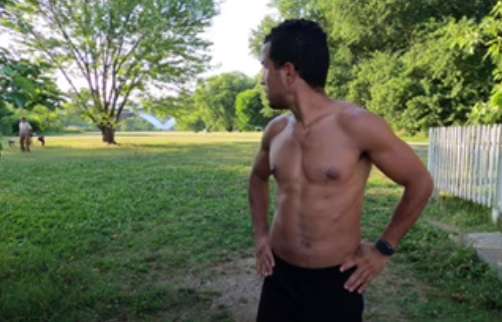 Amine Ballafrikh was wrapping up one of his daily workout videos at Jones Point Park on Thursday, July 2, when an unidentified man went on a racist rant and threatened to shoot the two-time North American Lightweight Muay Thai champ.

Ballafrikh, who is also the number three Muay Thai lightwight in the world, fought his way out of Moroccan slums to be a U.S. citizen. He trains every day at Jones Point Park, and was filming a video at the end of a workout and speaking in Arabic when a man nearby began a racist and threatening tirade.

Ballafrikh looked shocked by the comment and asked the man if he was okay.

“Yes, I’m talking to you asshole,” the man replied. “Get your ass out of my country, bitch.”

Ballafrikh again asked the man who he was talking to and if he was okay.

“Who else am I talking to?” the man replied and yelled obscenities at the fighter.

Ballafrikh later filmed the man brandishing a large hunting knife at the park and cutting strips of paper to show the knife’s sharpness. He later called the police and said he is going to send them the videos. He has not seen the man at the park since the incident.

“I have never experienced anything like that over the last eight years I’ve been in the United States,” Ballafrikh told ALXnow. “If he did this to a child or someone who can’t defend themselves, he would basically step on them. I hope they find him, because a man like that can really hurt someone.”

Alexandria Police spokesman Lt. Courtney Ballantine said that anyone who feels threatened to call the police.

“It’s a sensitive time right now, and at any point if you feel threatened you need to call the police, because we will investigate it,” Ballantine said.