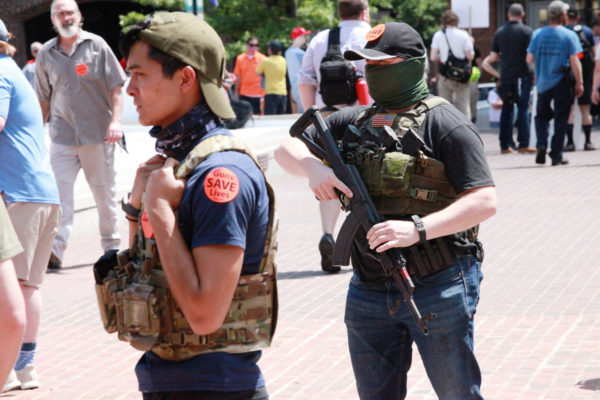 An Alexandria nonprofit is working to get every state to improve its background checks on gun purchasers, and Democratic lawmakers are taking notice.

Safer Country was founded in 2019 by Alexandria attorney Paul Alan Friedman with the mission of taking firearms away from dangerous people. Friedman said that progress was made in the general assembly’s last session, but there is a ways to go.

“We have finally closed the gun show loophole,” Friedman told ALXnow. “We’re making progress on cutting off avenues for people to buy guns illegally. They are going to have to go through a background check system in our state, but internet sales are still a problem in the country.”

Tonight at 7 p.m., Safer Country will host a virtual town hall with Congressman Don Beyer, Delegate Rip Sullivan (D-48), Alexandria Police Chief Michael Brown and Commonwealth’s Attorney Bryan Porter. The topic will be Virginia’s new red flag law, which allows law enforcement to take firearms from people who are deemed to pose a great risk to themselves and others.

Effective July 1, new gun law changes will require gun sellers to receive verification that a background check has been conducted on purchasers by the Virginia State Police. Additionally, Virginia’s one-handgun-a-month law was passed, as well as a requirement to report all lost and stolen firearms to authorities.

In Alexandria, the city council recently voted to prohibit firearms on city property. The move led to a gun rights protest in Old Town on June 13.

Friedman said that the names of thousands of convicted felons are currently not included in the state’s background check system, and that he’s working to gain awareness so that every state can improve its systems.

“In the fall of 2019, I went down to Richmond and met with Brian Moran, who’s the secretary of Public Safety and Homeland Security, and he estimated there were hundreds of thousands of names that might need to be in the background check system that weren’t getting there,” Friedman said. “They paired it down to about 55,000 convicted felons not entered into the background check system.”

Friedman’s family was shocked by gun violence in the early 1980s, when his great aunt, Elizabeth Shulkin, was shot and killed in a Florida hotel room.

“It was devastating,” he said. “A lot of vibrations that came out of it were difficult for people to handle. It wasn’t that it changed my view about the need for gun control or gun safety laws in the country. I was already formed in my opinions about that, but an experience like this makes you personalize, internalize it so that when you see other things like this happen on the news you have a greater depth of understanding.”

Safer Country, the Alexandria-based gun violence prevention non-profit organization, is working to get every state to…