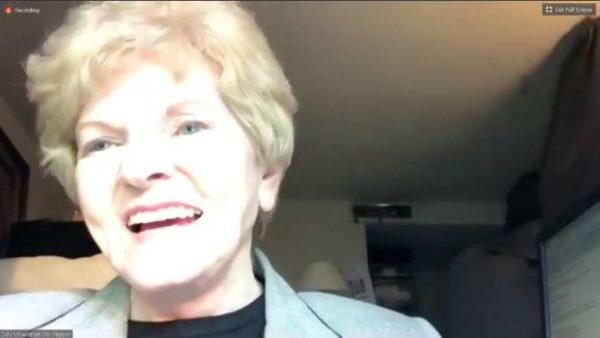 At Tuesday night’s virtual City Council meeting, Mayor Justin Wilson diverted from the agenda and took a moment to reflect on an important year — 1985. It was the year that “Back to the Future” came out in theaters, Ronald Reagan was sworn into his second presidential term, and Pepper was elected for the first time to the Alexandria City Council.

Lawmakers from around the region congratulated Pepper and council also adopted a resolution honoring her for 35 years of public service.

Pepper, now in her 12th term on council, has served with six mayor and served as vice mayor from 1996 to 1997, 2003 to 2006 and 2007 to 2009. A native of Omaha, Nebraska, Pepper moved to the city with her husband, Dr. F.J. Pepper in 1968. She is credited with focusing on improving the West End of the city, working to approve Alexandria’s Eco-City Charter in 2008 and co-chairing the committee overseeing the shutdown of the GenOn Power Plant in 2012.

Congressman Don Beyer said that when he proposed to his wife, Megan, that she agreed to live in Alexandria only because Del Pepper had recently been elected to the City Council.

“Thank you for your years of sterling service to the people of Alexandria, making this the best place to live,” Beyer said. “I look forward to 35 more years of your public service.”

“You are there, whether it’s a new business, a scout troop, an award for someone from Alexandria. If a garage door opens in Alexandria, some might say that you’re there,” Ebbin said. “Del, you were here in Alexandria to take a leadership role in the NAACP, and not as many white people can say that… (T)hank you for the foresight for the issues you’ve worked on, the commitment you’ve worked on them, and always being there.”

“I can’t believe it!” she said, as Virginia Democratic Majority Leader Del. Charinele Herring then spoke about how Pepper has helped her as a personal friend.

“Our community is so lucky to have you with your knowledge and experience,” Herring said. You’re a valuable resource for us.”

Del. Mark Levine said that Pepper used a George Washington lookalike to endorse her during her first campaign for office.

Wilson said that nobody has served with the level of Pepper’s commitment in the city’s history.

“We are so lucky to have the opportunity to serve with Del,” Wilson said. “We thank you for your service. We know it will continue long into the future. We look forward to serving alongside you.”

Pepper said she was completely taken by surprise.

“Oh, thank you so much,” she said. “Gosh, I feel like my life flashed before me, and that was certainly unexpected. Thank you very much.”

END_OF_DOCUMENT_TOKEN_TO_BE_REPLACED

More Stories
Ask McEnearney: What Can I Do To Make My Home More Attractive to Millennial Buyers?Large Residential Development in Braddock Goes to Planning Commission Tomorrow