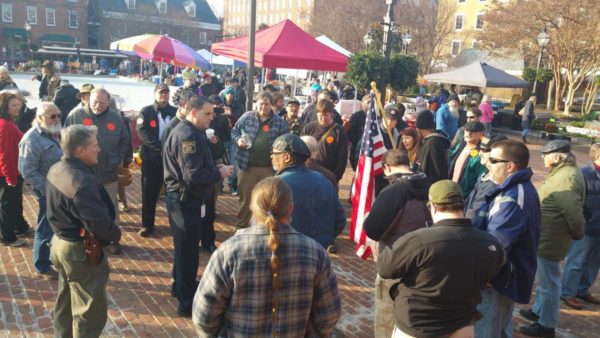 A large gun activism group in Virginia is planning a protest this weekend against new ordinances proposed by the City of Alexandria to limit the carrying of guns on city property.

The Virginia Citizens Defense League (VCDL) announced on its website that a protest will be held in Market Square outside of City Hall (301 King Street) from 2-6 p.m. with speakers scheduled to address the group at 3 p.m.

“The City of Alexandria is moving forward with public comment and a vote on a proposed ordinance to ban guns completely in government buildings, parks, recreation and community centers, and at permitted events and adjoining streets,” the VCDL said. “City Council had a chance to drop the proposed ordinance on Tuesday night, but did not.  They made a minor amendment that did nothing significant for gun owners and voted to move forward with the public comment period and final vote on Saturday, June 20.”

The ordinance would make it a misdemeanor to carry a gun in government buildings or property, like parks, and at or near permitted events.

The minor change added was allowing historical reenactors to carry firearms at demonstrations or two and from those events, provided the weapons weren’t loaded or fireable. Several speakers at the public meeting lamented that the sweeping ban would mean that legal gun owners could inadvertently be breaking the law just passing through a pocket park or near where an event is taking place.

The organization encouraged gun owners from outside Alexandria to come into the area to support the protest.

“If passed, this ordinance would take effect on Wednesday, July 1, and would make criminals out of peaceful gun owners for merely being on a street that abuts a permitted event, or walking through any one of a myriad of public parks, or to go in City Hall to pay their taxes!” the VCDL said. “As gun owners, we need to stand together and fight gun control as a team.  Gun owners should come to protests, even if they are in different localities.  Fairfax, Falls Church, Prince William, Arlington, and Loudoun gun owners need to support Alexandria gun owners and vice versa.  An attack on the gun-rights of any of us, is an attack on all of us!”

This isn’t the first time gun activists have held demonstrations in Alexandria. Last September, a group called The Right to Bear Arms walked through the Farmer’s Market carrying weapons and alarming some patrons. The same protestor stood outside Del. Mark Levine’s Old Town home in protest to a ban on assault weapons that Levine proposed.

“A large turnout will send a strong message to any other localities that are considering following in Alexandria’s foot steps,” the VCDL said, “that gun owners are NOT going to meekly accept ANY restrictions on our right to protect ourselves and our families!”

The group advised protestors to stay on the sidewalks and public areas and not to block roadways, sidewalks, or entrances to businesses.

“We are there to protest one thing and one thing only: City Council’s proposed ordinance to strip us of our right to self-defense,” the VCDL said. “Do NOT be goaded by any bystanders into addressing any ANY other issues. Stay on point. I have notified the police department that we will be there to peacefully protest.”

The group did note that Alexandria does not allow people to carry a loaded firearm with a magazine in it that will hold more than 20 rounds or has a threaded barrel or a collapsible stock without a concealed handgun permit. So, if you have one of those you were hoping to show off in Old Town this weekend, best to leave it at home.