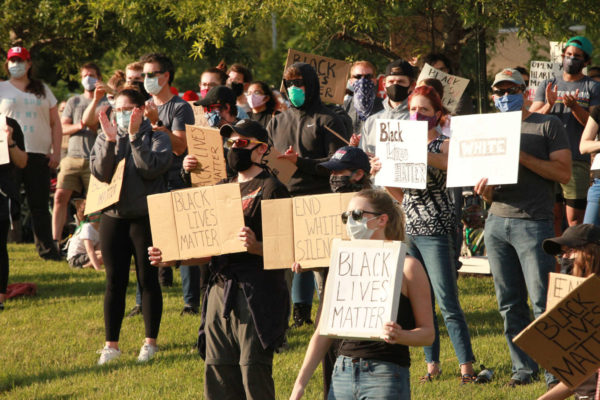 Alexandria is shutting down vehicular access to a number of its roadways Thursday, as residents are expected to turn out in droves in support of George Floyd and a number of African Americans who have died at the hands of the police throughout the country.

A number of new events have also been planned in Alexandria in the days ahead. Today from 4-7 p.m., a march is planned from George Washington Middle School along King Street to the George Washington Masonic National Memorial. Traffic is being cleared for pedestrians, and drivers are being advised to avoid the area.

There is also a planned vigil tonight at Charles Houston Recreation Center at 7 p.m. Participants will gather in the parking lot and walk to the front of the building and pray, have a moment of silence and listen to community leaders. No roadways will be shut down for the event.

On Friday at 7 p.m., Tenants & Workers United are scheduled to hold a Vigil for George Floyd and Other Victims of Police Brutality in Arlandria. No roadways will be shut down for the event.

“Let’s join in solidarity with our Black community,” notes the TWU Facebook post. “Please bring a candle, poster, or other tribute to honor the lives lost at the hands of police. We will gather in the parking lot behind TWU’s building at 3801 Mount Vernon Avenue.”

Additionally, on Saturday there will be a peace walk at Ewald Park, which is at the intersection of Duke Street and Wheeler Avenue. The walk was organized by teen Alexandria siblings, who will start walking at 5 p.m. and end at 8 p.m. with a “Cha-Cha Slide” dance with Alexandria Police, according to The Zebra. It is not clear if any roadways will be shut down for the event.

Earlier this week, community leaders conducted an online discussion on racial inequities in Alexandria, and that same day hundreds gathered outside police headquarters where Police Chief Mike Brown and his staff stood with demonstrators at an #EndWhiteSilence vigil.