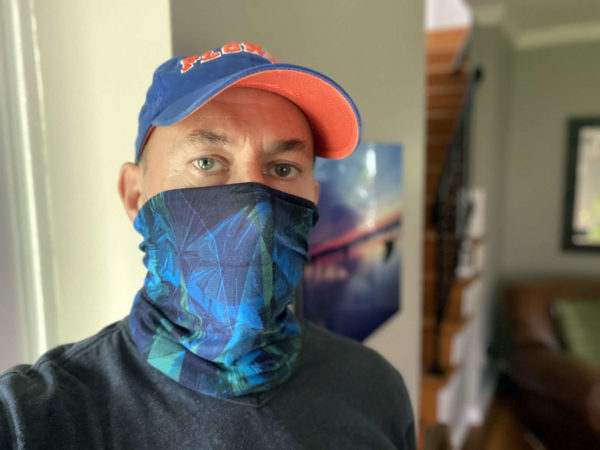 During the worst part of his infection with the coronavirus, David Posey had a fever of about 102.8 degrees and hoped he wouldn’t die in his sleep.

The Del Ray resident has recovered from a COVID-19 infection, but only found out he was infected after the fact.

“I did not get tested until it was all over with and I had an antibody test, so I didn’t get the COVID test,” Posey told ALXnow over the phone. “My primary care doctor said he had no access to the tests and he said he had no COVID patients at the time.”

The 59-year-old Posey didn’t experience common symptoms of COVID-19. His main symptoms were fevers and chills. He never had a cough, sore throat or a loss of taste or smell. He also had no appetite while he was sick from about March 14-March 29, and lost about eight pounds. His primary care physician ended up telling him over the phone that he likely had the flu, and to call him if Posey started to experience respiratory issues.

“I never did call him back, until last weekend after I got the antibody test and found out that I was positive,” Posey said. “He said he does have 24 cases now and two people have died.”

There are now 1,240 COVID-19 cases in Alexandria, and there are 41 reported cases in the 22301 ZIP code, which includes Del Ray. Del Ray has the lowest number of infections, and there have also been 343 residents who have been tested out of an estimated population 15,171 people.

Posey, who is a graphic designer and photographer, was in Las Vegas prior to getting sick, and he questions how he contracted the virus. His friends and neighbors dropped off food and Gatorade outside of his front door. He treated the illness with Extra Strength Tylenol.

“I started feeling sick in the middle of March,” Posey said. “I was actually in Las Vegas and had gotten back the end of February, so I’d been home for a week-and-a-half, and just kind of milling around here and I started to feel bad.”

For work, Posey creates PowerPoint keynote presentations for conferences with thousands of people at large venues all over the country. If it were not for COVID-19, he would now be working a show in Orlando, Florida, followed by another big show in Las Vegas at the end of this month, and then a show in Denver, Colorado in the beginning of June. But all of those events have been canceled, and Posey is wondering what large conferences will look like in the days ahead.

“I was very busy in January and February and then everything came to a screeching halt,” he said. “It will be interesting to see when they start thinking that they can do them again and if people are going to be wearing masks, or they’ll be limited by how many people will be allowed in a ballroom?”

Posey is single and doesn’t even have a dog because of his busy travel schedule, he said. Staying at home for such a long period was challenging, and he would wake up in the middle of the night drenched in a cold sweat, and would have to change the sheets to his bed to be able to comfortably get back to sleep.

“I didn’t leave my house for about five weeks total,” he said. “I was pretty sick and I just had no energy. I had body aches and my teeth would chatter and I live by myself, so when the news was starting to get scary I would go to bed go and hope I wouldn’t die in the middle of night.”

Posey was on the road to recovery with 60 hours without a fever, and then he got another fever and felt as if he was back at square one.

“I was thinking I was done with it and then, boom. I get a fever and had to start over again, and they say you have to wait 72 hours after your last fever before it’s really out of your system,” he said. “Nothing sounded good, nothing tasted good. I just didn’t really want to eat.”

Posey was sick for about two weeks, and decided to take a blood test with Quest Labs on Duke Street. The test cost $129, and he paid full price instead of using his health insurance.

“I just wanted to know for my own peace of mind,” he said. “I kind of kept it a secret from most of my friends but I didn’t want anybody worried about it.”

Posey wears a face mask now when he goes to the store, even if there is the possibility that he is now immune to the virus.

“It’s as much about protecting everybody else,” he said. “I still wearing a mask when I go out, and I’ve been shocked to see so many people in the store without wearing masks. Customers aren’t required to wear them.”