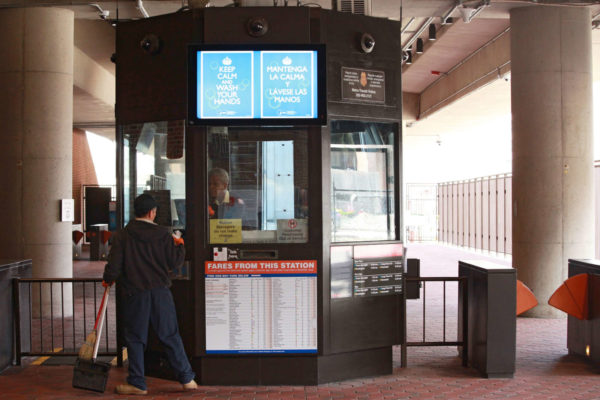 The Washington Metropolitan Area Transit Authority is interested in receiving more federal CARES Act funding, as the transit system has seen a 90% reduction in ridership and the transit system may not return to full functionality until next year, WMATA Board Chair Paul Smedberg told ALXnow.

On Saturday, WMATA unveiled a multi-phased COVID-19 recovery plan Monday, and it says that service may not fully resume until next year.

“Since Metro implemented its pandemic plan, ridership has fallen by 95% on Metrorail and by more than 70% on Metrobus,” according to the plan. “The return of pre-pandemic levels of community activities including travel will likely depend on the timing of easy access to testing, a widely-available vaccine and the building of immunity. The CDC suggests this may be the case by some time in 2021.”

The pandemic has also created an opportunity to expand Metro’s summer rail improvement shutdown. Last summer, all of Alexandria’s metro stations were shuttered for renovations, and this summer all nine Orange and Silver line stations west of the Ballston-MU station will be closed and Silver line service will be temporarily suspended, beginning on May 23 until September.

Smedberg, a former member of the Alexandria City Council, was named chair of the Metro board last year and said that the speed of the pandemic took him and the WMATA board by surprise. 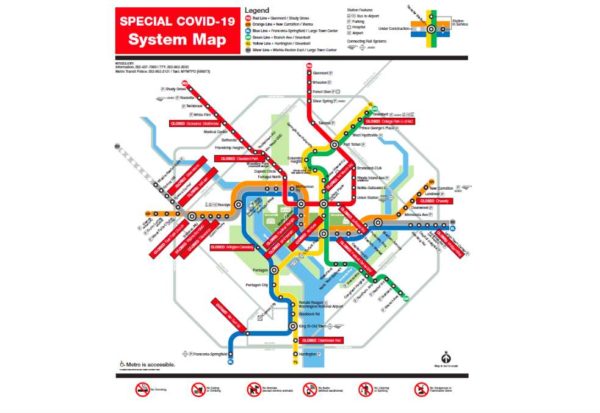 ALXnow: When did Metro begin to get inklings that it was going to have to resort to emergency operations?

Smedberg: It was about the same time everyone else did, really. There was some chatter that there was a pandemic coming, and the staff started to prepare when everything really started to hit in the region at the end of February and the beginning of March.

ALXnow: Metro has only been around 53 years. The New York City subway system was around during the Spanish Flu pandemic of 1918. Have you been in consultation with other subway and service train providers around the country on best practices? Or have you simply been referring to your own emergency preparedness plan?

Smedberg: Metro obviously has plans in place for emergencies, but in terms of the scope of this, no. Immediately the general manager did put a team in place to manage the issue, our chief safety officer coordinated, and still does coordinate, the efforts in response to the COVID, the safety of workers and riders and making sure that people are still able to get around.

We’re an essential service for the area, whether it’s rail or bus, a lot of people are getting to hospitals, to their work via Metro. Metro is coordinating with the hospitals in the region to help get the essential workers to and from work with shuttles. This is pretty new for everyone. Paul Wiedefeld [Metro’s CEO and general manager] is talking to his counterparts around the country about various ways they’re dealing with the issue.

But it’s been very coordinated and also unique for Metro, because we’re a multi-jurisdictional entity. We’re coordinating not only internally, but externally with the Commonwealth of Virginia, the state of Maryland, the District of Columbia and the federal government. So, a lot of coordination is going on at that level as well, making sure that we’re in sync with the local transit agencies and other departments in the region. So, it’s really a multi-faceted effort, and I think they’ve been managing it quite well, actually. 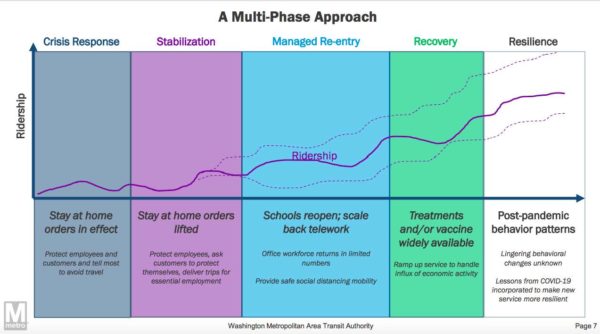 ALXnow: The economy was booming before this implosion brought on by the virus. What did Metro’s 2020 future look like before the pandemic?

Smedberg: Metro after the (summer) shutdown and all the rehabilitation projects over the last couple of years and everything. Reliability is way up, safety is way up, ridership was up across the board, both bus and rail. We were seeing real strides. We had a few new initiatives that we were looking forward to help further enhance and increase options for riders, and this hit and everything ultimately had to be put on hold. We’ve seen quite a drop in ridership, about 90%, that other systems have and other buses systems have across the nation.

It’s been a real challenge. Obviously, we were able to take advantage of some of the CARES Act money that was made available to transit systems across the country. That’ll help stabilize things a little bit as we move forward, but it is definitely going to be a challenge. We’re very sensitive to how jurisdictions are having to deal with things financially. They, ultimately for the most part, are the ones paying the bill. So we’re very sensitive to what’s going on and we’re all dealing with the same challenge. So, it’s gonna be a year where we’re really gonna have to reflect on what we’re doing and why we’re doing it.

ALXnow: Metro received $877 million in federal CARES Act funds, and $110 million was earmarked to reimburse localities for the hit for on monies that they won’t be receiving due to Metro’s reduction in services. How else has Metro been impacted? Have you had any layoffs?

Smedberg: That money’s obviously been very helpful. There have been no layoffs or furloughs, and because of that a lot of those dollars will be put toward making sure people are still employed. That was one of the main purposes of it. We were able to credit some of the money back to the jurisdictions to help them with their subsidy.

I think right now we’re looking at various scenarios as to when ridership does start to come back, when will things be lifted enough? When are companies or organizations going to feel comfortable enough in having employees phase back into their office space and how that’s gonna look?

ALXnow: Do you need any more federal funds?

Smedberg: There’s talk of the possibility of a CARES Act 2, sort of the second phase. We would be interested in that and that would obviously be very helpful. I think the American Public Transportation Association is actively advocating for that right now and is working with Congress. They just sent a letter to Congress and the administration requesting in a bill $23.8 billion to address additional costs, because of revenue losses in excess of public transit funding provided by the CARES Act.

ALXnow: How much do you need out of that?

Smedberg: No idea. I’m not sure what the formula would look like for that. Metro is one of the nation’s larger systems, though.

ALXnow: With ridership down so significantly, how closely has Metro been continuing to sanitize stations, trains and buses?

Smedberg: That has been top of mind for quite a while now. We get regular updates from the safety officer on how those efforts are going, if there have been changes. That’ll likely be going on for quite some time.  That was a concern from the very beginning, how to manage cleaning and sanitizing the cars and certain parts of the stations, and internally, because we have a decent number of folks who are deemed essential that have to be at work in person, and they cannot work remotely from home.

ALXnow: If you go to a hospital, the heroes right now are those on the front lines, the doctors and the nurses. Right now in Metro, the heroes are the bus drivers. Do you have enough bus drivers?

Smedberg: So far so good. We get updates constantly on the workforce and the number of people that are infected. We made changes operationally where people now are boarding the rear doors of buses so there’s less exposure to the drivers and the riders. There are no fares being collected right now for bus ridership, which is free. People with disabilities can still enter through the front doors.

The management is in constant contact with labor, and those relations are good. So far there’s been a lot of cooperation and communication and keeping everyone as safe as can be.

ALXnow: You’re also going to be expanding the summer closure of stations for track improvements. Can you talk to me about the opportunity for making some infrastructure improvements?

Smedberg: There was an originally planned shut down for a certain segment of the Orange and Blue lines, but with ridership down significantly, management has proposed an additional shutdown for further opportunities along the orange and blue line and in the silver line, taking advantage of that shutdown and the fact that ridership is down so significantly. It’s money that’s there, part of the capital program and will prevent future shutdown disruptions in service, potentially, in the future.

ALXnow: Do you anticipate future summer construction projects to continue, or will those capital funds be reallocated?

Smedberg: We haven’t really talked about that. I don’t think we’ve really gotten that far yet, to be honest.

ALXnow: In other words, has COVID-19 impacted your capital improvement program at all?

Smedberg: Not to date.

ALXnow: Virginia and other localities are preparing to reopen. How are you approaching that?

Smedberg: That’s the thing we’re looking at when people are going to start potentially going back to work in our three jurisdictions, and seeing what the reopening plans are for localities and how they’re managing things. Now, things are still changing so quickly, day-to-day, week-by-week.

It’s been very, very interesting. I’ve learned a great deal. The board now as it exists is a really good group. And everyone is playing their part and chipping in and we have really good working committees, and, more importantly, I think, we have really good management of Metro right now.