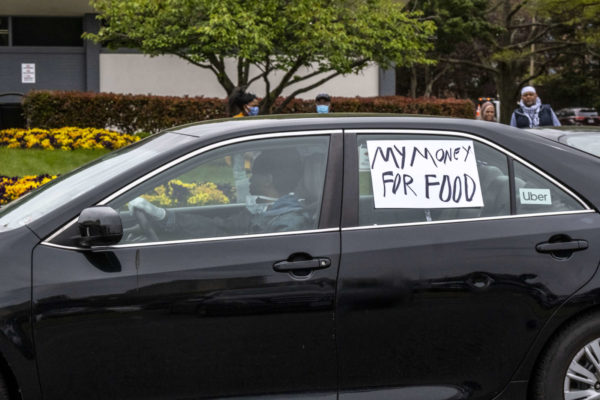 A pair of strikes filled the streets outside Southern Towers late last month and on May 1, but despite some extended support for renters out of the job due to COVID-19, those who helped stage the earlier protests said the fight to stop rent from being charged to those without a job will continue to go on.

“Bell Partners has extended its previously-announced measures to help residents financially impacted by COVID-19 into May,” a spokesman for Bell Partners, which operates Southern Towers, said. “The due date for May rent has been pushed back to May 20 and late fees have been waived.”

Organizers of the earlier protests said the second rally was larger than the first and carried over into a protest concerning another building with the same property owner.

“The last action that residents took was on Friday, May 1,” said Sarah Jacobson, lead organizer with UNITE HERE Local 23, a regional union that represents some residents in the building. “[It was] a car rally that included probably twice as many residents as at their first car rally held on April 20.  That action also involved tenants at another building, Dominion in Alexandria, that is also operated by Bell Partners and owned by Snell Properties (the same owner and operator structure as at Southern Towers).”

Jacobson recognized that Bell Partners has extended the late fees each month, but said deferred payment is still expected over a six-month period. The Alexandria City Council warned in an earlier meeting that many residents that are currently out of jobs could face difficulties over the next months finding new jobs as the economy slowly reopens. These residents would be saddled with not only paying ongoing rent but paying rent for months when they were unable to work.

“A recent Vox news article estimated that 70% of jobless Americans did not receive unemployment benefits in March,” Jacobson said. “I estimate that this number is both higher among Southern Towers residents and also remains true in April, as so many workers are gig workers for whom the [Virginia Employment Commission] has not begun to approve benefits.  This makes the prospect of paying 25% of rent in April, and then 25% (for May rent) + 15% (for April rent) in May under Bell’s proposal completely untenable for families without any income at all since the second week of March.”

The City Council approved some rent assistance for those living in committed affordable units, which does little to help most residents at Southern Towers, but the city is also looking at implementing a larger program to help low-income residents with rent city-wide.

Jacobson said Southern Towers residents are continuing to organize for rent relief and are currently reaching out to residents of other Bell Properties to build a larger coalition.

END_OF_DOCUMENT_TOKEN_TO_BE_REPLACED

More Stories
Alexandria Businesses Brace for a Cautious Reopening Next WeekChadwicks Cautious of Fully Reopening, Thanks Alexandrians for Support