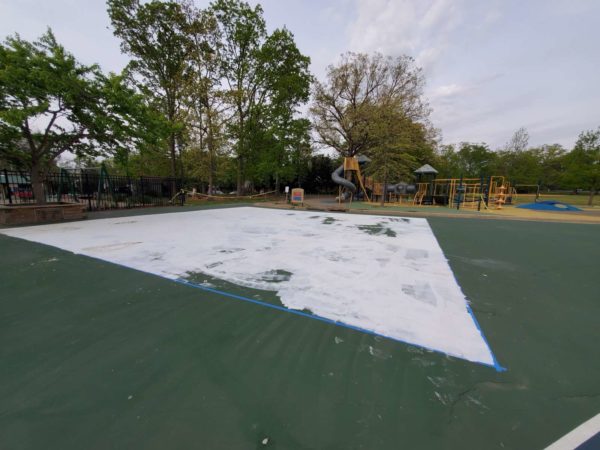 Gabriel Pineda thought his Eagle Scout project was going to be easy, until he got to George Mason Elementary School and saw that the old ma of the United States painted on the blacktop that he remembered was completely gone.

At first, the 17-year-old wanted to do a touch-up project on the map he played on as a young boy, but it was removed when the playground was resurfaced a couple of years ago. Instead, Pineda decided to completely repaint the entire 35-foot square map from scratch.

“(W)hen I was there I always liked the map. It was colorful, it was bright and fun to play on,” Pineda said. “We also learned where the states are, so I decided I wanted to put it back onto the blacktop for the kids, so that they could have that as well.”

Pineda, who plans to study marine biology this fall at Ferrum College, got the approval of his Scout troop and then met with George Mason Elementary Principal Brian Orrenmaa, who jumped at the opportunity and helped convince the school PTA to pay for the stencil.

“I think any elementary school has a goal of having a lasting impact with their students,” Orrenmaa said. “I was very thankful for him willing to help, so I approved it fairly quickly.”

The new map will also be geographically correct. Its predecessor inaccurately located Alaska and Hawaii in the Gulf of Mexico.

Pineda lives down the street form the school and plans to have the map finished by the end of the month. He is now getting help from a half dozen or so of his co-Scouts and his family, all of whom are wearing protective face masks and plastic gloves. He’s also installing a six-foot-tall ruler near the playground at the school so that students can measure their heights.

So far the primer has been laid, and the map will be painted in non-toxic concrete and patio paint in red, blue, green, purple and orange.

“When I’m home from college on a break or something I can still go and see it (and say), ‘Hey, I did that,'” Pineda said. “Once this whole pandemic is over I can go to the playground and see the kids playing on something I did.”