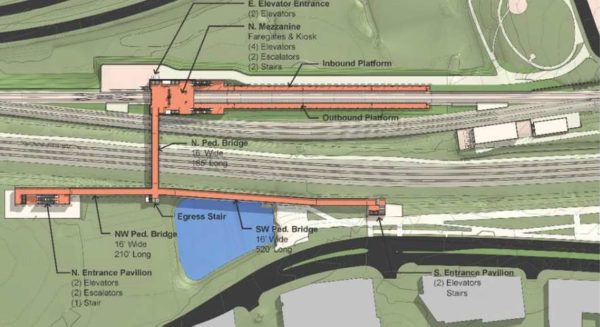 While city business has mostly been limited to pandemic related emergencies, the Alexandria City Council is moving forward with time-sensitive decisions about southwest access to the new Potomac Yard Metro station.

Southern access to Potomac Yard was a selling point for businesses and organizations moving into the parts of that area, but was cut back to save money on the project. The new plan does not include the full southern entrance as originally envisioned, and instead replaces it with a bridge that connects to the northern entrance.

Staff told council that it’s a solution staff said will fit within the project budget.

“Today, we are also letting council and the mayor know that the total cost will be covered within the $50 million of state funding along with the credit from the original ramp,” Daphne Kott, a project manager in the Department of Project Implementation, told council on Tuesday night. “[It] will be completed within the construction duration of the overall station.”

There was debate between the city and Metro contractors that a southern access could be built within the $50 million in funding provided by the state, and late last month both parties agreed the project could be accomplished under that amount.

The city’s plan for southwest access is docketed for a public hearing on Saturday, April 18.