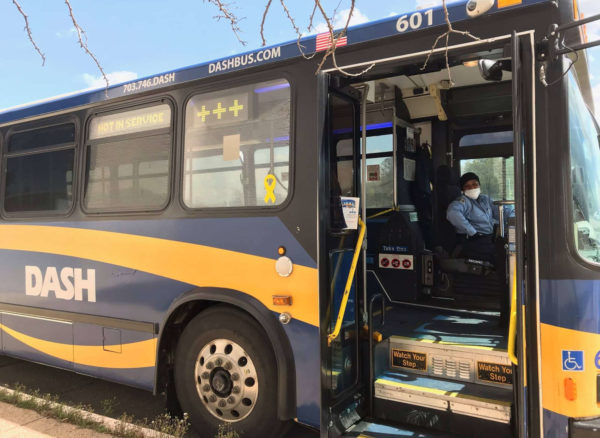 Carpenter’s Shelter opened a 40-person temporary safety shelter at the Charles Houston Recreation Center on Monday, and up to 40 chronically homeless people will be sleeping on mats on the basketball court.

The Carpenter’s Shelter David’s Place/winter shelter is now closed for the season and does not provide the same space for distancing as Charles Houston (901 Wythe Street).

The city’s DASH bus system transported 40 people to Charles Houston on Monday. Eight families have also been relocated to hotels in the city, and Carpenter’s Shelter plans on renting out the hotel rooms and using the recreation center for a month.

“They were too crowded in that amount of space, and that’s what prompted the discussion and exploring other alternatives in the community,” Carpenter’s Shelter Executive Director Shannon Steene told ALXnow. “This has been quite a coordinated response with various partners across the city as this whole pandemic has unfolded.”

If the recreation center and hotel rooms are still needed after a month, an extension will be considered, Steene said.

“We might have to make a reassessment,” he said. “The base goal amid all of this is making sure that people are safe.”

Steene said that the organization, which is working without volunteers for the first time, needs up to 50 homemade face masks, sanitary wipes and hand sanitizer for his staff and residents.

“We do need masks. We got a shipment in of homemade masks, and they went very quickly to our residents,” Steene said. “We’ve ordered commercial ones, and as with everyone they’re on backorder, so we’re just holding our own at this point trying to keep safe and covered with cloth as best as possible.”

Those interested in donating to Carpenter’s Shelter should contact Volunteer Coordinator Jamila Smith at 703-548-7500, or at [email protected]