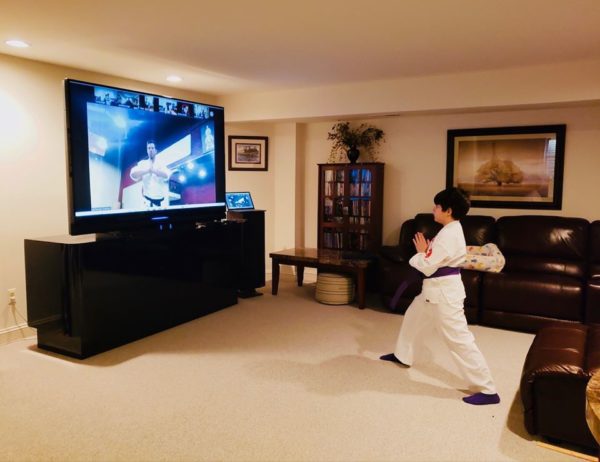 On one video screen, local karate instructor Richard Romero initiates a kick, and in living rooms across Alexandria, dozens of children in his Seichou Karate school follow suit.

Since the coronavirus pandemic started, Romero has been forced to take his school at 807 N. Royal Street into online Zoom conference calls. But for Romero, parents, and students in the classes: the online karate school has been a measure of stability.

Years ago, when a friend told Romero he should take his class online, he said it sounded like “selling the hole in a donut.” So far, the classes have been popular with the student body, with very few of those who had been attending in-person classes dropping out. For parents, the classes have been a welcome consistency for their children whose lives have been upended by COVID-19 and the shutdown of the schools.

“It’s been incredible that he’s been able to pull all of this together,” said Marc Abizaid, who has a five-year-old and a thirteen-yer-old enrolled in Seichou Karate. “I’m really thankful that he was able to do this. It’s pretty amazing. There’s a lot of kids who have nothing to do, so it’s great to make a schedule.”

Romero said he’d originally planned to keep the brick-and-mortar studio open, but was talked out of it by his wife. Fortunately, Romero said he’d had experience running classes from three years ago.

“We had an online program two years ago but the platform and the website went belly-up so we took it all down but we learned a lot from the experience,” Romero said.

Like other industries, Romero said martial arts have had to adapt to people turning to e-learning, the pandemic has simply accelerated that need. Romero said online classes also give the benefit of being able to keep up training with students who move because of jobs or changing administrations.

At first, online classes were only for students who were already taking in-person classes, but Romero said he’s opened up to taking new students with no experience.

“Necessity has really been the mother of invention,” Romero said.

For Romero, storytelling and the feedback sessions are just as important as the kicking and punching. In addition to storytelling sessions, Romero also has meetings on the third Saturday of every month just for a relaxed talk about concepts in martial arts, like mushin and giri.

“I think the rapport between a teacher and a student is based on trust and familiarity,” Romero said. “I think having that quiet time with the children, when we’re not punching and kicking, it’s a completely different context and provides an oppurtunity for very different learning and communication.”

Romero specializes in Japanese karate and martial arts, having studied and taught Karate in Japan. Romero said his classes are very much tied with teaching children elements of Japanese culture.

“Japanese culture is not just karate and sushi, it’s broader than that,” Romero said. “Students learn about the elements of culture that appear in the stories and little asides. They have cultural elements relevant to each story.

Right now, Romero is teaching 58 classes a week now, which is almost double what the school normally teaches, but the classes have been scaled back from 75 minutes to 30 minutes to be more flexible to fit people’s scheduled. There are large classes of up to 100 students on Zoom, then smaller breakout classes with groups of 10.

At first Romero said he was worried about how the pandemic changes would affect the school’s business.

“This is an exestential threat to my business,” Romero said. “In Japan, no one would think about ceasing to pay a martial arts school, but that’s a cultural difference.

Since the program has started, though, Romero has only had eight students drop out, and some new students have been recruited since then. For the parents of students in the program, the online classes have helped manage the stress of social distancing.

Abizaid said his students know that 1 p.m. is storytime, in which Romero tells translated Japanese folk tales, and later in the day is the older son’s karate class.

“For these kids, to have something on a schedule, that feeling of emptiness it mitigated by having this,” Abizaid said. “When I see them doing it and I’m able to text reminders to my wife [about the schedule] I’m thankful that we have this because everything else has fallen to the wayside and for the kids that’s tough.”

END_OF_DOCUMENT_TOKEN_TO_BE_REPLACED

More Stories
Just Reduced in Alexandria: April 7Where to Get Passover and Easter Meals Around Alexandria