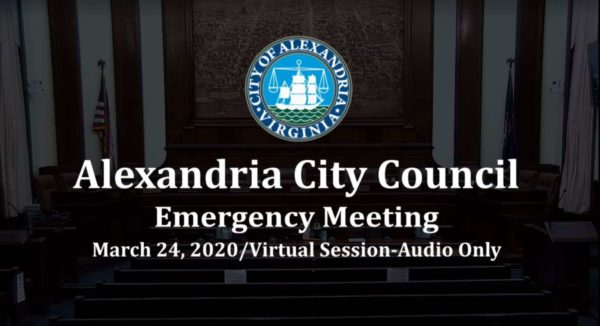 The number of confirmed COVID-19 cases in Alexandria yesterday jumped from nine to 13 as the city struggles to manage a pandemic that may just be getting started.

“Ordinarily would be talking about Potomac Yard and housing crisis — we’re pushing that aside,” said Mayor Justin Wilson at an emergency tele-City Council meeting last night. “It’s been a heartbreaking week, with the promise of more heartbreak ahead.”

Dr. Stephen Haering, director of the Alexandria Health Department, informed the City Council that four new cases of coronavirus were discovered over the last day.

“This is going to be a long, long term process until we have a medication to treat it,” Haering warned. “We know we’re going to get more positives as we go through this.”

An emergency ordinance passed last night put a moratorium on penalties for restaurant meals taxes, transient occupancy tax and the BPOL (Business, Professional and Occupational License) tax in the city.

Kendel Taylor, the city’s director of finance, was careful to say that the tax does not eliminate the tax altogether but delays collection.

“This will allow them to basically not pay us and hold onto those collections,” Taylor said. “Beginning in July, any new collections would be subjects to penalties and interest.”

Taylor said the funds between Feb. 1 and July would be remitted until the end of the moratorium, with businesses able to pay that tax back in smaller monthly payments without interest until June 2021. If the business that collected the tax closes before those are paid, Taylor said that tax money is still due but might not be pursued if there is no money there to collect.

“We’re not waiving any taxes, we’re putting a moratorium on when we would apply penalties and interest,” Taylor said. “It enables restaurants to pay later than they might have under previous ordinances… The document threads the needle of what we can do.”

“It’s important to note we will be getting this money back,” added Councilwoman Redella “Del” Pepper.

Regardless, the city is looking at massive losses in budget funding. The city is in the middle of radically reshaping the budget, both for next fiscal year and looking at immediate cuts from the current fiscal year. At the meeting, several department heads offered cuts from their budgets.

“We were supposed to do a meeting tomorrow for the budget [but] the proposed budget on the table is really rendered obsolete by this point,” Wilson said. “As the city manager discussed internally, we are going to have to do a substantial rewrite of the proposed budget as well as take pretty significant changes in the current fiscal year.”

City Manager Mark Jinks said the early estimates will have a 20% impact on the city’s operating budget.

“Over time, assuming some recovery in fiscal year 2021, we think the total might be of the order of magnitude of $100 million,” Jinks said. “Usually in a recession there’s time to prepare, here our revenues fell off a cliff overnight.”

Some cuts were easy, like reductions in waterfront programming for the rest of the year and less focus on attracting outside tourism, but Councilman John Taylor Chapman warned that the cuts wouldn’t be nearly enough to accommodate for the financial toll of the pandemic.

Wilson called on the federal government to step up to the plate.

Wilson said he hoped the deadlock in Washington would soon be broken, which it was hours after the meeting.

Other emergency legislation authorized at the meeting gave Jinks the power to approve grant applications if time does not allow him to present the applications to the City Council for a vote.

Councilman Canek Aguirre raised the discussion of placing a moratorium on rents in Alexandria, though he recognized that the city was limited in its power to do so.

“We are limited as a locality on what we can do,” Aguirre said, “but we have to do something for our residents who are feeling an extraordinary amount of anxiety.”

Helen McIlvaine, director of the Office of Housing, said her office is working to make sure people are in touch with local resources for rent assistance but acknowledged it’s “certainly not the full answer to their insecurities.”