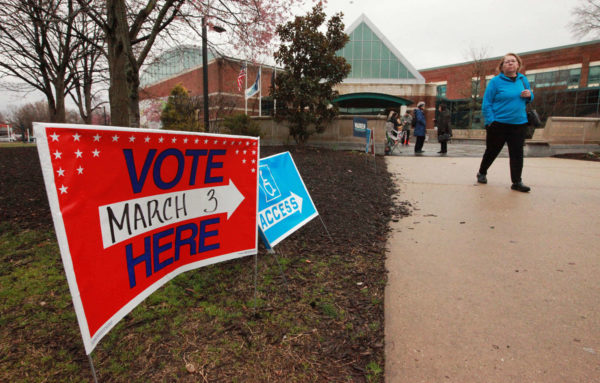 Former Vice President Joe Biden had a strong showing on Super Tuesday in Virginia and in Alexandria — where he won every precinct and 54% of the vote — but Alexandria’s second choice was not as clear cut and broke down along geographic lines.

Both senators Elizabeth Warren and Bernie Sanders were neck-and-neck with 18% of the vote, with Bloomberg trailing in fourth with 10% of the city’s vote, according to the Virginia Department of Elections.

Throughout Old Town, Biden won over 50% of the vote, but for the precincts at City Hall and North Old Town, Bloomberg came in second with around 15% of the vote.

Those were Bloomberg’s only second-place finishes in Alexandria. Across the rest of Alexandria, Warren and Sanders duked it out for second.

Warren won second in a stretch of Alexandria from Del Ray and Parkfairfax in the north. Those second place wins for Warren stopped at Quaker Lane, however. Seminary Hill, the West End, and Landmark areas all voted Biden in first and Sanders in second.

While Biden lost one precinct in Arlington to Sanders, he never dipped below 43% of the vote in Alexandria. The closest race was Precinct 302 at the Patrick Henry Recreation Center, where Biden was still 127 votes above Sanders.

There was also still some support for candidates who’d already dropped out. Counting the non-absentee votes, 64 people still showed up to the polls for Pete Buttigieg and 86 for Sen. Amy Klobuchar. Both got more total votes than still-in-the-race Tulsi Gabbard.

Absentee voting, largely reflecting a more crowded field prior to Biden’s big South Carolina primary win and endorsements from Buttigieg and Klobuchar, narrowly favored Warren. The Massachusetts senator received 21.3% of the absentee vote to 21.0% for Biden, 17.0% for Bloomberg, 16.4% for Buttigieg, 14.8% for Sanders, 8.1% for Klobuchar.