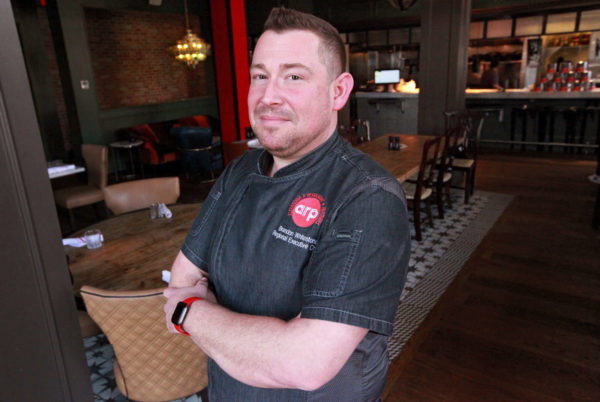 Brandon Whitestone is at his best working with a team of people in the kitchen. After a career running kitchens in restaurants around the country, the 35-year-old has made Northern Virginia home in his newest job as regional executive chef for Alexandria Restaurant Partners.

“Kitchens are kind of controlled chaos,” Whitestone tells ALXnow. “It’s exciting to be a part of that and the feeling you get to see your team fight through battle together and grow with each other. You know, a lot of people visit restaurants for special occasions and to commemorate something, so it’s really important to make sure that goes properly for them.”

Whitestone, who recently moved to the area with his wife and young son, has his work cut out for him. In addition to making sure that quality is maintained at ARP’s nine restaurants, which include Mia’s Italian Kitchen and The Majestic, he’s also overseeing the menus that are going into the company’s new locations at the former Robinson Terminal South property.

A native of the Boston-area, Whitestone has a degree from the New England Culinary Institute, and has spent the last 13 years running kitchens at award-winning restaurants in Florida and Georgia. His credits include stints at the now-closed Chef Allen’s, Rosa Mexicano and The Olde Pink House.

Whitestone knew he was going to move to Northern Virginia when he was hired by ARP a year-and-a-half ago, and in the interim helped open Mia’s Italian Kitchen in Orlando, Florida.

“The plan always was for me to come up to Virginia, because most of our restaurants are here,” he said.

Whitestone, who traveled to Virginia once a month from Florida since being hired, works closely with the executive chefs of each ARP restaurant, in addition to more than 50 kitchen staffers.

‘You can’t just hand somebody a recipe and say, ‘Here you go.’ That doesn’t create a lasting change and a quality product. You have to get in there and teach them and show them and work with them and develop them,” he said. “And it’s amazing to watch your people grow, because sometimes the first time someone brings you something that needs more finesse. And then, you know, over time you’re able to mentor that person, grow them to the point where they’re bringing you something awesome every time.”

Whitestone’s favorite dish on the menu is the Sunday gravy at Mia’s.

“It’s kind of an old school Italian thing,” he said. “Traditionally, on Sunday morning we throw a bunch of meats into a pot, cook it all together and make this great stew. Ours is fresh sausage, braciole, meatballs, chicken thighs all cooked down with San Marzano tomatoes. It takes about six to seven hours, and all those juices come out and marinate, and then we serve it over house-made pasta. It’s delicious.”