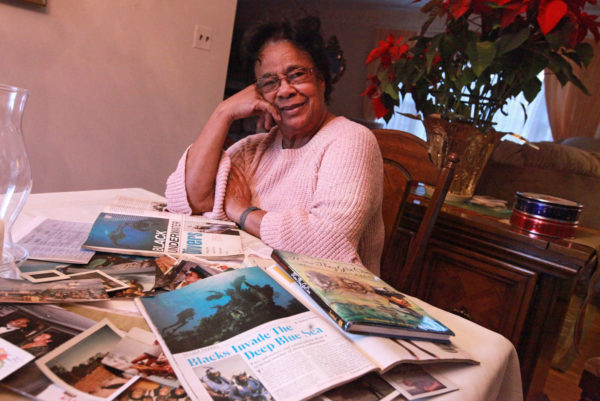 “Water makes me comfortable,” Marshall-Lee told ALXnow. “I’ll think about the day, and I don’t have to worry about anything.”

Marshall-Lee, who worked 30 years at the Defense Logistics Agency as a computer technician, was raised as the eldest of two sisters in The Berg neighborhood in north Old Town. She was 13 when she learned how to swim. Once a week during the summer, she recalls, a bus would pick up neighborhood kids and take them to blacks-only pools in Washington, D.C. 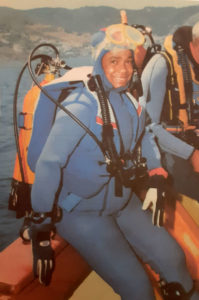 Alexandria didn’t have any swimming pools for African Americans until the opening of Memorial Pool in 1952. Before then, many black residents swam in the Potomac River, and between 1931 and 1951, nine young African Americans drowned. The year it opened, the 16-year-old Marshall-Lee became a lifeguard at the city pool, which is located at Charles Houston Recreation Center.

Lee used to visit her when she worked as a lifeguard.

“The pool was like a magnet for the community,” he said. “Back in the days of segregation, there were not many avenues for blacks in Alexandria, quite frankly, so people congregated at the pool in the summer.”

In 1965, she met Dr. Albert Jose Jones, the president of the Underwater Adventure Seekers, the first African American scuba diving club founded in 1959 and based in Washington, D.C. That same year she got her basic certification, and the following year became the club’s first female member. She’s a dive master, and her qualifications include Professional Association of Diving Instructors and Atlantic Skin Diving Association advanced diving and open water certifications.

Marshall-Lee’s diving and swimming have garnered awards, including first place in the 1972 Atlantic Skin Diving Council Rodeo, the free diving portion of the Middle Atlantic Spearfishing Championship and in the USA Swim for Fitness program in 2001 by swimming 44 miles in four months. She is a founding member of the National Association of Black Scuba Divers, and has been featured in Ebony Magazine and a number of books.

Marshall-Lee has dived all over the world, including Fiji, Morocco, Mexico, Jamaica, Egypt, Bermuda and Haiti. She also participated in a well-publicized dive of the Henrietta Marie slave ship off the Florida coast in 1993.

“I love looking at the fish, you know, just going down seeing things in the water, picking up things that you ain’t supposed to pick up,” she said. “Getting a little seashell or starfish. You know, I have a whole lot of shells and I don’t know what to do with them. Right now they’re in the garage, so I need to give them to somebody. I hate to throw them away.”

The last time she dived was in 2006 in Malaysia.