(Updated at 7 p.m.) A T.C. Williams student was arrested at the school today (Thursday) and charged in the killing of two people on a rural Virginia Highway, NBC 4 first reported.

Ntombo Joel Bianda, 21, of Alexandria, and Ayanna Munne Maertens Griffin, 19, of Germantown, Maryland, were found shot to death along Route 58 in southern Virginia over the weekend.

The Alexandria Police Department confirmed to ALXnow that its officers were on scene at the high school for the arrest of a T.C. student. The case is being investigated by Virginia State Police, an APD spokesman said.

An 18-year-old Alexandria male has been arrested and charged in Saturday’s double homicide in Halifax County. On Thursday (Feb. 13, 2020) morning, the Virginia State Police Bureau of Criminal Investigation’s Appomattox Field Office took Mohamed A. Aly into custody without incident in Alexandria, Va. Aly has been charged with two counts of first degree murder and two counts of use of a firearm in the commission of a felony. Aly will be held at the Blue Ridge Regional Jail in Halifax, Va.

At 2:51 a.m. Saturday (Feb. 8), Virginia State Police responded to Route 58 in Halifax County near Melon Road. A silver 2009 Nissan Maxima was located in the median with Ntombo Joel Bianda, 21, of Alexandria, Va., and Ayanna Munne Maertens Griffin, 19, of Germantown, Md., found deceased and lying in the grass nearby. Both had suffered gunshot wounds.

“State police personnel have been working around the clock pursuing multiple leads related to this homicide investigation,” said Capt. David O. Cooper II, Commander of the Virginia State Police Bureau of Criminal Investigation’s Appomattox Field Office. “We cannot thank the public enough for providing the tips and information necessary to aid our special agents with effecting an arrest so quickly.”

Since Saturday, the FBI Richmond Field Office, ATF and several other local law enforcement agencies have been assisting state police with the homicide investigation. State police has also been assisted with various evidentiary searches in Halifax County by K9 teams from the Virginia Department of Corrections and Bedford County Sheriff’s Office.

As the investigation remains ongoing at this time, the Virginia State Police is still encouraging anyone with information about this incident or individuals involved to contact us at 434-352-7128 or #77 on a cell phone or to email [email protected]. Anonymous calls are welcome. 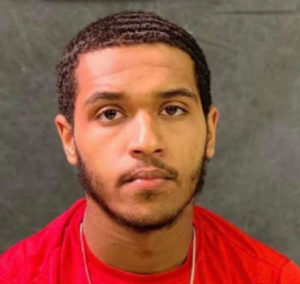 A student at T.C. Williams tells ALXnow that the suspect, Mohamed Aly, “was telling all his friends” about the slaying. That account could not be immediately confirmed by police.

Aly was a popular student and a player on the varsity football team, and a few of his T.C. classmates expressed support for him on Snapchat Thursday night.

Via Twitter, T.C.’s athletic director discouraged players from speaking to members of the media.

ATTENTION: TC Football Players, students and athletes please do not respond to any media who reaches out to you! Let me know and we will handle it. @TCTitanFootball

Just after 5 p.m., principal Peter Balas sent the following email to T.C. Williams families, acknowledging the arrest and saying that counselors will be available at the school “over the next few days.”

We are writing to inform you that a T.C. Williams High School student was arrested today for his alleged involvement in a crime that occurred outside of the City of Alexandria and our community. We are complying with authorities as they conduct their ongoing investigation, and we are referring all questions to Virginia State Police. It is ACPS policy to not comment on an active police investigation.

This situation was handled today according to protocol, and the safety and security of our students and staff were never at risk. Protecting members of our school community is always our top priority, and we take any matter relating to the safety of our schools very seriously. As a precautionary measure, additional security will be in place at the school tomorrow.

We should expect that there will be a variety of reactions to what has occurred, and the most important thing we can do is to be supportive and encourage an open expression of emotions. Counselors will be available for students and staff members at the school over the next few days. We encourage your child to reach out for support as needed. We will be monitoring students carefully over the next few weeks. If you feel that your child or family needs assistance, please contact the school administration at 703-824-6800, and we will do everything we can to help you.

A GoFundMe page has been set up to raise money for Bianda’s memorial fund. So far it has raised just over $7,000.

James Cullum contributed to this report