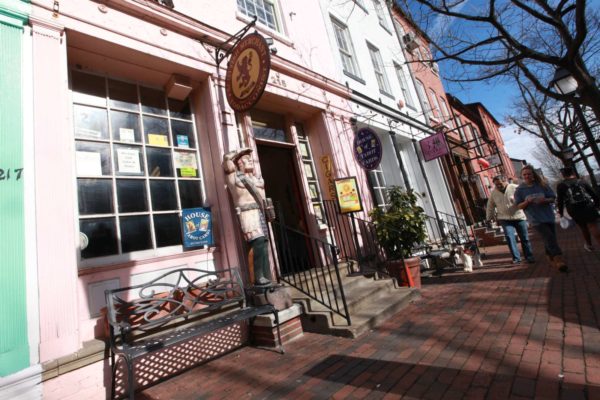 A deal to take change hands at a longtime Old Town tobacconist and Scottish gift shop has hit a snag.

Last fall, plans were being set for Old Virginia Tobacco Co. to take over The Scottish Merchant/John Crouch Tobacconist at 215 King Street. Merchandise was marked down half-price and the new owner even planned to keep on veteran staffers and keep the shop open while undertaking renovations in January and February.

But no changes have been made since.

“We hit a snag, so we’re still working through it,” Old Virginia Tobacco’s General Manager Brian Ceres told ALXnow without going into finer detail. “It’s by no means dead in the water. We still love those guys and making something happen there.”

The shop, which has been on King Street under the same ownership for more than 30 years, serves a dual purpose. As The Scottish Merchant, it sells Scottish tartans, kilts, hats, jewelry and accessories. As John Crouch Tobacconist, it carries a wide range of cigars, pipes, tobacco and other accessories.

Old Virginia Tobacco, which has locations in Arlington’s Fashion Centre at Pentagon City mall and in Seven Corners, is known for its lounge atmosphere, leather couches and big screen televisions. The company has six locations around the region, and its president said last fall that his company was excited to make the move.