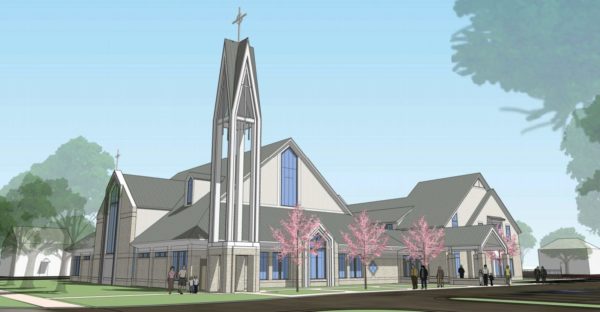 Opponents of the Alexandria Presbyterian Church’s expansion went into Saturday’s public hearing knowing it was an uphill fight, and ultimately the City Council unanimously struck down the appeal.

The City Council voted unanimously to uphold the Planning Commission’s ruling in November that Alexandria Presbyterian Church could expand by-right from a 3,400 square foot building that can’t hold its congregation to a 22,794 square foot gothic-inspired church.

Neighbors, who rallied around a petition to appeal the Planning Commission’s ruling, came out to the public hearing in force to share a wide range of concerns about the project like increased traffic, parking in front of neighbor’s homes, and increased stormwater runoff.

Richard Weiblinger, one of the appellants, showed photographs of backups on Scroggins Road, a road the church would be built along that’s frequently used as a traffic cut-through. Weiblinger said residents were concerned that they wouldn’t be able to get in or out of their driveways with the added traffic, noting that driving on Scroggins is already “a game of chicken.”

A letter published by the Alexandria Gazette Packet and written by Cara Weiblinger said the area is already “overwhelmed” by traffic, expressing concerns about “incredible pain and a diminished quality of life for neighbors” and “bad blood between a church and the neighborhood in which it plants itself.”

The argument that the new church would add dangerous levels of traffic to the nearby roads didn’t garner any more sympathy from the City Council than it did from the Planning Commission, with councilmembers repeating the Planning Commission response. Councilwoman Redella “Del” Pepper said current hours of peak traffic were different from the hours of peak usage for the church — namely Sunday ,orning.

“They’re not going to be there on Monday mornings,” Pepper said.

One area where the City Council did recognize the plight of nearby residents was on the stormwater issue. Several neighbors noted that the area already has stormwater drainage problems. One said that her basement is regularly flooded during storms and she was concerned that more impervious space across the street would only make that situation worse.

“If you can’t mitigate stormwater adequately, I’m the one that pays for that,” the resident said. “If they don’t manage the stormwater, it’s going to put us under, and I don’t just mean literally underwater… Please don’t be lazy and just say ‘it’s going to be fine.'”

Cathy Puskar, an attorney for the church, argued that the church would not have a negative impact on the neighborhood, pointing to a handful of stormwater management initiatives at the site that she noted could improve the local flooding issues. Many on the City Council seemed unconvinced, though ultimately not enough to change their vote on the project.

“If we’re serious about looking at water runoff, we need to push our applicants to do more progressive things,” Councilman John Chapman said.

Mayor Justin Wilson said the stormwater issues being raised by neighbors were existing conditions, but the city would have to look at ways to work on the runoff situation in that area in the upcoming budget season.

Despite these concerns, staff noted that the project met all zoning requirements, which Puskar argued left the city with no choice but to approve it, which the City Council ultimately did.

“What many of the neighbors are telling us is that it’s counterintuitive that you can have a church double its size and not double some of the problems,” Pepper said. “We’re really in a tight spot. There’s no wiggle room. We have to follow the law.”