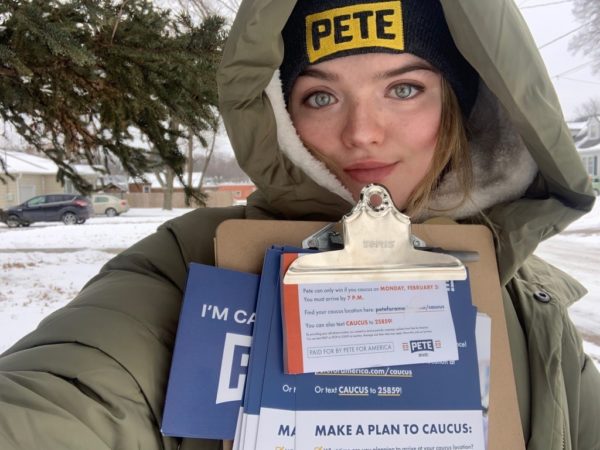 Boyd Walker has never done this before. On the night of Jan. 29, the Alexandria resident will travel nearly 1,000 miles with 18 others in a four car caravan from Alexandria to Cedar Rapids, Iowa, to volunteer with Sen. Bernie Sanders’ presidential campaign.

“It’s fun. It’s an adventure. It’s a road trip with a bunch of people who share your values and goals,” Walker told ALXnow. “Whoever the candidate is, there should be tremendous enthusiasm, because Donald Trump is the most corrupt, dangerous president we’ve ever had and will be very damaging to our democracy and our planet if he spends another four years in office.”

The Iowa caucus, which is the first nominating battle between the Democratic candidates vying to run against President Trump this fall, is on Feb. 3. The presidential primary process has yielded a historic number of Democratic candidates, fundraising figures and engagement among grassroots activists and volunteers.

The contest has galvanized many Alexandrians to action, including 19-year-old Barrett Fife (above), who took a year off from the College of William & Mary and moved to Urbandale, Iowa, last August to work on the presidential campaign of Pete Buttigieg, the mayor of South Bend, Indiana. She’s now a field organizer for the campaign, managing up to a dozen volunteers who are knocking on at least 100 doors a day in the run up to the primary.

“I’m taking a break. My school was really amenable and said to take as much time off as I need and to give them a ring,” Fife said. “No matter who wins, our nation is going to be more broken and divided than ever before, and I think Mayor Pete will help heal those divisions.”

Fife interned in years past with Del. Mark Levine (D-45), but it was the kind of work that an assistant would do.

“It’s been crazy to now be leading 40-to-70-year-old Iowans. Sometimes they look at me like, ‘Who is this kid?’ but it’s been fun flexing those leadership muscles,” she said. “It’s been absolutely amazing. It’s been crazy because I’ve lived in Virginia my entire life and go to school in Virginia, so this is the longest I’ve spent away from home.”

Clarence Tong, chair of the Alexandria Democratic Committee, said that Democrats are “laser-focused” on defeating Trump.

“It is exciting to have the Iowa Caucus finally here in just a few weeks and Alexandrians will have the opportunity to vote in the Virginia Primary on Super Tuesday (March 3),” Tong said. “Absentee voting has already started, so please make sure to make arrangements to vote if you cannot make it in person.”

Kurt Peterson of Charlottesville will lead the caravan of local Sanders supporters in four cars to Cedar Rapids. His group will stay in Airbnb rentals and do as directed by field organizers on the ground. In 2016, he knocked on more than 1,300 doors in seven states for Sanders.

“We’ll do whatever is most beneficial to the campaign,” Peterson said. “We’ll see how things go. I’m probably not going to New Hampshire or South Carolina because I think the effort is needed here. But after Super Tuesday we’ll see how we do and what’s next.”