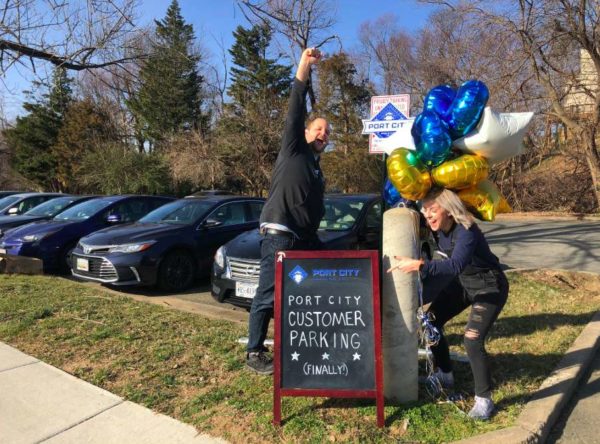 Update on 1/22/20 –Craig Fifer, spokesman for the City of Alexandria, told ALXnow in an email: “Port City did not ‘snag away’ the parking lot from the City. When the City learned that an Alexandria business was attempting to purchase the lot, we discontinued our efforts to purchase it.”

Thanks to some new negotiations, 4001 Wheeler Avenue might become a place you’re happy to find your car, rather than an impound lot.

In December, the City of Alexandria started moving forward with negotiations to acquire 4001 Wheeler Avenue — directly across Wheeler Avenue from the Port City Brewing Company at 3950 Wheeler Avenue — and use it as an overflow impound lot to help handle the city’s shortage on impound space.

According to Emma Quinn, a spokeswoman for Port City, the brewery was working on acquiring the space around the same time.

“There had been talks about the city buying and we saw that [ALXnow] article in November when Bill had already been in negotiations to get the lot for [Port City],” Quinn said. “Luckily, we were able to secure it!”

The brewery is in an industrial-heavy area off Duke Street and is off the beaten path for most transit services, meaning the existing parking lot is heavily used even when there aren’t spaces taken up by food trucks for events.

Though the idea of adding more car parking at an alcohol-focused venue might turn some heads, Port City said most of their events feature sampling in small amounts.

“We always encourage responsible drinking!” Quinn said in an email. “Luckily, our brewery serves as a place to educate and sample the product more than a bar scene where people are drinking to excess. A lot of customers come by just to get beer to-go and were avoiding doing so because we didn’t have enough spots.”

For large events, Quinn said Port City provides Lyft codes to get people to and from the brewery safely. She also noted that tasting room beer guides are trained to watch for people getting intoxicated.