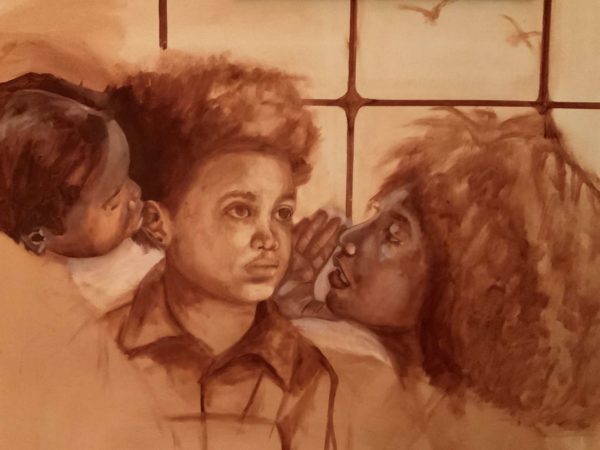 Eric Crenshaw believes in fate and that he was destined to create paintings depicting the emotion involved in the story of the Enterprise slave ship.

The ship left the port of Alexandria on Feb. 11, 1835, and was blown off course by a hurricane and landed in Hamilton, Bermuda, where a British Court freed 72 of the 78 slaves, who were held in appalling conditions on the Enterprise.

“This is a story about freedom, and I’m working to find descendants of the Enterprise as we speak,” Crenshaw told ALXnow. “It’s the story of turning tragedy into triumph, and I’m a Christian. I believe that God had a hand in making this happen.” 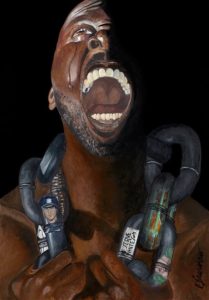 Two years ago, Crenshaw and his wife, Rhonda, were visiting friends in Hamilton when they came upon a historical marker recognizing the Enterprise.

Many of the slaves on board the ship were kidnapped freed blacks and were not listed on the ship’s manifest. The previous year, Britain abolished slavery in each of its territories, and upon arrival the Enterprise’s captain, Elliot Smith, was presented with a writ of habeas corpus by former slave Richard Tucker, commanding him to deliver the 78 men, women and children to a Bermuda court. Thomas Butterfield, the chief justice of the court, then interviewed each slave and freed them all.

It was only 25-year-old Matilda Ridgely who decided against freedom and returned to the United States with her five young daughters, Ann, Betsey, Helen, Mahaley and Martha.

“Matilda’s story is what captivated me. She had to choose between freedom and returning home to her other children in the U.S.,” said Crenshaw, who lives in National Harbor. “One of the paintings I’m working on is called ‘Matilda’s Dilemma,’ which will show the pain of the decision that she had to make. She’s going to have five tears streaming down her face and in the tears you will be able to see the reflection of her children.”

As part of the installation’s creation, Crenshaw met Tom Butterfield, founder and creative director of the Masterworks Museum and direct descendant of the former Bermudan chief justice. He is also now working with a genealogist to locate descendants of the freed slaves to invite them to the exhibit, and plans to include pieces by Bermudan high school students.

“The fact that we were just walking down the street and saw this plaque, that the gentleman I met at the museum just so happened to be the great-great-great grandson of the chief justice of the Bermuda court who freed them, and so many other things that have lined up to make this happen seems to me to be more than coincidence,” Crenshaw said. “I was meant to do this.”