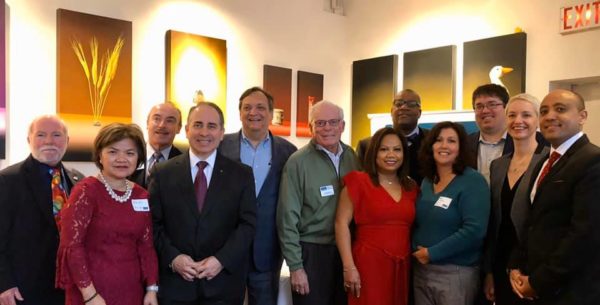 The organization was founded in 2005. Wendy Albert, owner of Tempo Restaurant (4231 Duke Street) and former president of WEBA, hosted the birthday celebration at her restaurant.

Tempo Restaurant is, in some ways, an example of the kind of adaptability necessary to open a business in the West End. Albert told guests that the restaurant was once an old gas station the owners renovated — trading car bays for dining tables.

Adapting former industrial sites to retail or restaurant use is a skill likely to come in handy as Alexandria pushes for more of the West End’s industrial zones to become commercial. Virginia Paving was told earlier this year that it had seven years to clear out and — reading the writing on the wall — Vulcan Materials’ plans to redevelop its Alexandria site as mixed-use with a hotel are scheduled to go to the city for approval early next year.

The organization is designed to help local businesses coordinate with other business owners and city leaders, hosting networking events and luncheons throughout the year.

In addition to WEBA members, city councilmembers John Chapman and Del Pepper and former Mayor Allison Silberberg were in attendance, the group said in a Facebook post.