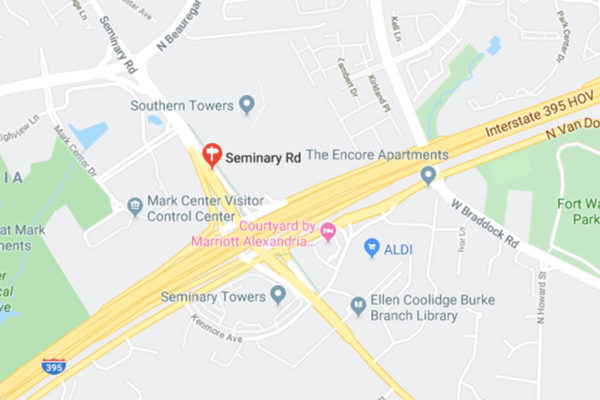 After the launch of the I-395 Express Lanes, Transurban is turning its attention to a ramp connecting I-395 to Seminary Road near the Mark Center.

The south-facing ramp, which opened in 2016, is currently restricted to HOV traffic and buses traveling north in the morning and south in the evenings. Transurban hopes to change that, opening the ramp up to toll-paying traffic — allowing another point of access to Seminary Road for drivers on I-395 and another incentive to use the Express Lanes.

Transurban is scheduled to pitch its plans at a meeting scheduled for next Monday, Dec. 9, from 6:30-8:30 p.m. at the Minnie Howard Campus (3801 W. Braddock Road). The presentation is scheduled to start at 7 p.m.

The meeting is an opportunity for the public to find out about an operations analysis assessing the traffic and safety impacts and benefits of converting the I-395 and Seminary Road Ramp in the City of Alexandria from a High Occupancy Vehicle (HOV)-only ramp to a High Occupancy Toll (HOT) ramp. The ramp would continue to provide access to the 395 Express Lanes but would be available to vehicles with fewer than three occupants who pay a toll, and for free to vehicles with three or more occupants.

The north-facing ramp is currently open to toll traffic. The City of Alexandria’s webpage for the ramp said Transportation and Environmental Services (T&ES) is coordinating with Transurban and the Virginia Department of Transportation on an analysis of the potential change and looking at how the changes could impact local traffic.

Revenue from the tolls on I-395, and from the ramp, would go towards transit services and multimodal solutions — projects aimed at getting people out of their cars and onto mass-transit.