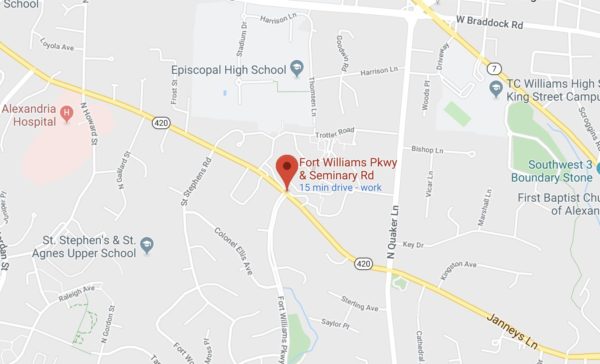 (Updated 1:30 p.m.) A chase by the Virginia State Police ended with a crash at the intersection of Fort Williams Parkway and Seminary Road

The car being chased wrecked shortly after noon and Virginia State Police took the suspect into custody “without incident,” according to Lt. Courtney Ballantine, a spokesman for the Alexandria Police Department.

State Police on the scene on Seminary Road indicated that they were in high-speed pursuit of a vehicle from I-395 that ended on Seminary Road just east of Fort Williams Pkwy. You can see a new sign from a pedestrian median refuge island on the front of the car. pic.twitter.com/X67zFzrTqy

The intersection was closed as of 1 p.m., but Ballantine said it should reopen shortly.

Police said Virginia State Police involvement meant the pursuit almost certainly started on one of the nearby interstates — the intersection is a mile away from I-395 — but the details on where and how the chase began were unclear.

NOTIFICATION :: The Alexandria Police Department is assisting the Virginia State Police in the intersection of Fort Williams Parkway and Seminary Road. The intersection closed. Expect police activity in the area.