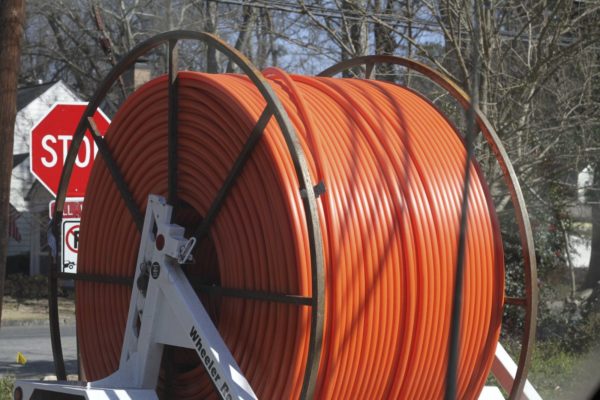 The City of Alexandria is inviting companies to bid for the construction of a municipal fiber network, putting the city one step closer to breaking the current monopolies on television and telephone services in Alexandria.

The city is hoping to build a broadband network that can support voice, video and data transportation at public facilities. A side benefit of this plan is an increase in consumer choice in cable, voice and broadband services at a variety of costs and available speeds.

The system design was completed in August. The design focused on addressing connectivity for city buildings, public schools, library and public safety communication needs, according to the city website.

Yesterday the City issued the Invitation to Bid for the construction of our Municipal Fiber Network.

This is an important step in our process of expanding the broadband infrastructure for municipal and eventually private use in our community. pic.twitter.com/X3bxvJs4eT

For years, the city has sought out other potential providers, but the website notes that “companies are typically reluctant to make multimillion-dollar capital investments in new fiber networks.” Thus, the city is attempting to include the addition of fiber infrastructure wherever digging projects and utility work are already underway. Once the fiber network is built, the city would lease excess capacity.

“The city is planning to seek new franchisees who could lease excess capacity on the city’s new fiber-optic network and provide service to residents and businesses,” according to the city website. “This would allow all providers to compete fairly, and would incentivize providers to offer consumer services.”

Nearby Arlington County also built its own “dark fiber” network, at the cost of millions of dollars. But a plan to have businesses use the network, and thus provide an economic development boost to the county, have not panned out — as of earlier this year the network was almost totally unused.

A pre-bid conference for the Alexandria fiber project is scheduled for Tuesday, Nov. 19, in the purchasing conference room at 100 N. Pitt Street.