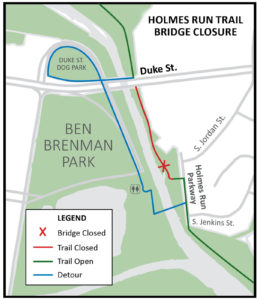 (Updated at 12:25 p.m.) Alexandria has closed a pedestrian bridge along Holmes Run after a safety inspection found the structure needed “immediate repair.”

The bridge that spans from Ben Brenman Park to Holmes Run Parkway was shut down late last week, according to city officials.

“During routine park amenity inspection by staff from the Department of Recreation, Parks and Cultural Activities, it was found that the bridge footings were unstable due to soft soil and loose rock below the footing,” the city said in a statement.

“An inspection by a civil engineer from the Department of Transportation & Environmental Services deemed the bridge to require immediate repair to ensure pedestrian safety,” city officials added.

For now, pedestrians will be able to follow signs for a detour route that crosses Holmes Run at the footbridge just south of the stream from the Holmes Run playground. This temporarily route links to back to Holmes Run Trail as it heads north towards Duke Street.