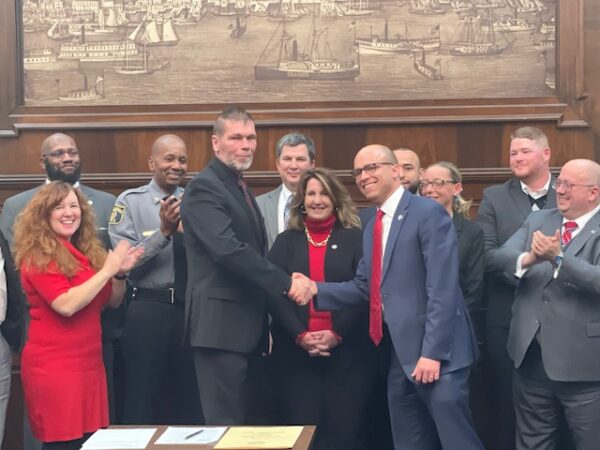 If likely approved in the fiscal year 2024 budget this May, the agreement means substantial pay increases for new officers, sergeants and lieutenants. The current base salary of $54,698 for an officer would be increased by 11% to $61,503 at the beginning of the next fiscal year, July 1, 2023. After next year, salaries for officers would increase 2% annually.

Mayor Justin Wilson said that the collective bargaining agreement is historic, since it’s the first of its kind to be approved in Virginia.

“This is a really important step.,” Wilson said. “We came to a place that that was mutually agreeable one that I think moves the needle forward and recognizes our hard working police officers for the work that they do every day for our residents at work that is greatly valued by the community, but does so in a constructive way in partnership with the city, recognizing that we’re all in this together.”

Damon Minnix, president of Alexandria chapter of the Southern States Police Benevolent Association, said that the agreement creates a new pay scale based on years of service.

“We’ve spent countless hours working towards this agreement,” Minnix said. “Most importantly, this process and agreement opens the lines of communication between the interests of our officers and city management.”

Compensation issues has plagued the Alexandria Police Department for years.

The agreement also asks the city to conduct a “cost-neutral, 20-year retirement option with an immediate payout and no minimum age requirement” for officers.

City Manager Jim Parajon said that coming to an agreement was an exhausting process.

“This agreement is not without disagreements, and is a I think an excellent start,” he said. “It really does value our police officers at a very significant level.” 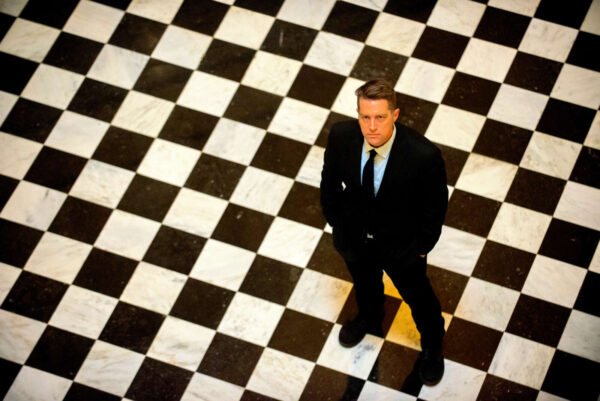 Years before Alexandria would grapple with collective bargaining and the legacy of discrimination in schools, Virginia was ruled by a political faction dead-set on fighting unionization and integration.

Alexandria reporter Michael Lee Pope — a reporter with the Alexandria Gazette who has frequently covered Virginia’s state politics for WAMU — announced a new book last week that dives into the history of The Byrd Machine, a political operation led by Harry Byrd that dominated Virginia politics during the mid-20th century.

The Byrd Machine in Virginia charts the rise and fall of the eponymous political block, with both a look back at the history of the previous “machines” that made The Byrd Machine possible.

“He got into this political debate when he was in the Senate about road building and not making debt. This is his whole thing, he’s very consistent, he doesn’t like debt.”

Pope said Byrd’s early campaign was about paying for projects as you go and he developed a name for himself as someone making the state government pay its debt. Byrd had a reputation as a penny pincher, going back to driving to Maryland every day to get cheaper rolls of paper for a failing Winchester newspaper he owned.

After being elected as governor in 1926, Byrd started to take measures to coalesce power and keep those in the Byrd Machine in power.

Two of the biggest legacies of Byrd, Pope said, is his opposition to unions and integration. In 1946, workers at VEPCO, the predecessor to Dominion Energy, attempted to form a strike and unionize. Governor William Tuck, a successor to Byrd and a part of his machine, drafted the workers into the state’s national guard and threatened to court martial them if they attempted to strike.

Still, Pope said the anti-unionization work in the 90s was still part of the legacy of Byrd’s politics.

“At the same time, don’t forget these people pioneered union-busting in a way that was visionary for its time,” Pope said, “There is an important part of collective bargaining as part of that legacy.”

The more well-known parts of Byrd’s legacy is arguably the machine’s opposition to integration. It was also the position that set the stage for the machine’s downfall. The Byrd Machine was instrumental in keeping schools segregated to the point of closing public schools rather than seeing them integrated in the late 1950s.

Though the machine had a “swan song” in the 1960s, Pope said the controversies around massive resistance ultimately led to the fracturing of The Byrd Machine as the Lyndon Johnson presidency divided the loyalties of racist southern Democrats.

Pope said he is planning to host a launch event for the book at The Athenaeum (201 Prince Street) on Thursday, Oct. 20, at 7 p.m.

In an election held by mail, the City of Alexandria Labor and Trades Bargaining unit voted to select the American Federation of State, County and Municipal Employees (AFSCME) District Council 20 Local 3001 as their union representative, AFSCME said in a release

“Determined to advocate for better pay and benefits like healthcare and retirement, workers chose to come together to have their voices respected in the workplace,” a release from District Council 20 said.

The vote — which saw 96% of members voting in favor — means 191 public sector workers in Alexandria will have union representation, according to AFSCME. The vote follows a similar move by workers in Arlington back in July.

In recent years, several groups of Alexandria workers have made significant strides toward union representation.

“We came together and stood strong to secure this historic victory,” Mark Johnson, a City of Alexandria heavy equipment operator, said in the release. “It feels good to be united with my co-workers in wanting to improve our work and services.”

“We all knew what was at stake and we came through to win a voice at the table.” Jason Hitt, a City building engineer, said in the release. “We’re excited to bargain a contract that represents the best interests of our communities and families – the way it should be.”