Travellers along some of Alexandria’s arterial streets might see things in a different light now.

Transportation and Environmental Services has been working with Dominion Energy to swap out the city’s street lamps with LED lights. So far, the city said around 40% of the city’s streetlights have been swapped.

“As of October 2021, many arterial streets have been successfully retrofitted, including Van Dorn Street, Eisenhower Avenue, Duke Street, Washington Street, and N. Quaker Lane,” the city said. “In addition, all of the fixtures in the Cameron Station neighborhood and the Carlyle area have been transitioned to LED.”

The next phase of the project will involve continuing retrofits on main streets, like Route 1, King Street, Braddock Road and Glebe Road. The city said the transition to residential neighborhoods is likely to start in early 2022 once the lights on the arterial and collector streets have been changed. The project is expected to be completely finished in around 12-18 months.

T&ES' Traffic Operations & Dominion Energy have been retrofitting the City's streetlamps with LED lights. To date, over 4,000 (~40%) of the streetlights are now LED. The remaining are slated to be retrofitted over the next 12 to 18 months. More info >>> https://t.co/SGv8v5x9an. pic.twitter.com/3xmPyhfovp 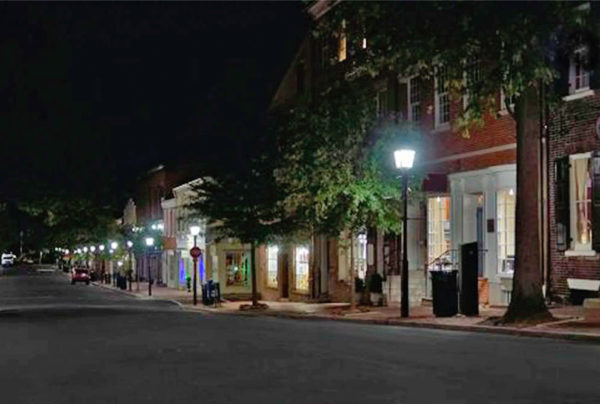 Alexandria’s lights are about to shine a little differently than most folks in the city might be used.

The City of Alexandria is working with Dominion Energy to retrofit the city’s streetlights with new LED lights. Currently, 150 lights have been swapped out, with the goal of replacing 2,500 by summer 2020. The city will have to replace 12 lights per day to reach that goal by June 20, the start of summer.

The new lights last five times as long as incandescent lights and reduce energy consumption by 90 percent, according to the Department of Transportation and Environmental Services. The city also said the new lights are brighter, will save money and help align with the Eco-City Alexandria and Vision Zero goals.

After years of delays that frustrated some regional leaders, LED light fixtures are being installed throughout the area, with new LED lights coming to Arlington and Tysons as well.