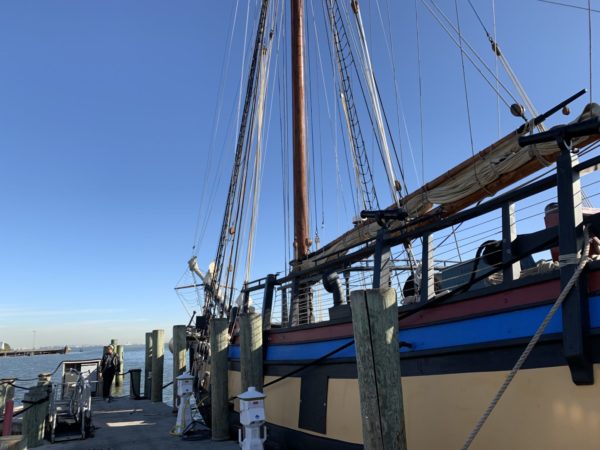 A ship on Alexandria’s waterfront will host an intimate retelling of a historic ghost story this weekend.

The tall ship Providence is not officially open yet, but the ship will be going through its first test as a permanent fixture of the waterfront with a “ghost ship” story.

Staff for the ship said two character interpreters will be reenacting a spooky story from 1777, when the original tall ship Providence encountered a ship behaving erratically — because it was reportedly helmed by a ghost.

There will be four performances on Saturday and Sunday — weather permitting — at 4, 4:30, 5, and 5:30 p.m. Tickets will be available later this week online but with a limit of 15 attendees per performance, given that the ship hasn’t been cleared for public visits.

Staff told ALXnow that the ghost story is true at its core, but flavored with a little embellishment over time.

There’s still no word yet on when the Providence will be open to the public. The ship was approved as a permanent waterfront attraction earlier this year, but is still awaiting final inspection by the Coast Guard and a few other technical hurdles. Clair Sassin, executive director for the Tall Ship Providence Foundation told the Waterfront Commission last week that the ship inspection is scheduled to take place sometime within the next three weeks.