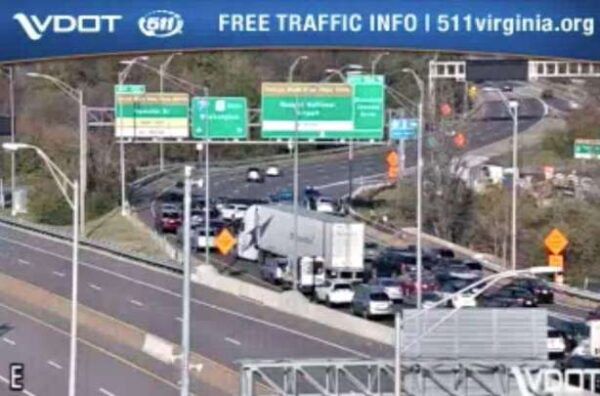 Four people were arrested and a number of firearms confiscated after a high-speed chase through Alexandria on Monday afternoon (Nov. 14).

At around 3 p.m., Virginia State Police initiated a traffic stop for reckless driving on a 2020 Dodge Charger near the Duke Street exit on Interstate 395.

“After reaching speeds in excess of 110 miles-per-hour, the pursuit ended near the exit for Boundary Channel Dr. where the Charger collided with another vehicle and then struck the guardrail,” VSP said in a release. “The driver of the second vehicle was treated at the scene for minor injuries suffered in the crash.”

Four people were arrested in the Dodge Charger, and police said that they seized narcotics, and three loaded firearms, including a “ghost gun.”

This story was first published on ARLnow.

VSP did not release the identities of the suspects, and said that the incident remains under investigation and that charges are pending.

It is not clear what led to the chase, and the incident follows a number of chases on I-395 in recent weeks.