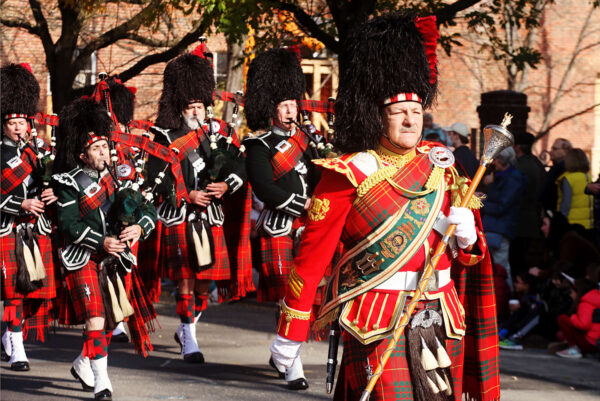 Visit Alexandria announced today that the city’s famous Alexandria Scottish Christmas Walk Parade will be returning for its 51st year early next month.

The parade features dozens of Scottish clans represented in full regalia, along with pipe and drum bands and costumes. According to Visit Alexandria, the event is scheduled for Saturday, Dec. 3, starting at 11 a.m.

“Alexandria was founded in 1749 by Scottish merchants and was named after Scotsman John Alexander who owned the land that became Alexandria,” the report said. “Today, the city continues celebrating its heritage with the iconic parade.”

The parade traditionally features over 35 Scottish clans gathering from around the region and across the country.

“Bagpipers include the Kiltie Band of York and the City of Alexandria Pipes and Drums plus a bagpiping Santa closing the parade,” Visit Alexandria said in a release. “A pipe band and color guard will be presented by St. Andrew’s Society of Washington, D.C., which is a charitable and social fraternity of Scottish descendants established in Alexandria in 1760, and a founding parade partner along with Campagna Center and the Old Presbyterian Meeting House.”

After walking the parade route, the pipe bands reassemble at Market Square for a concert.

“The parade kicks off on S. St. Asaph Street at the corner of Wolfe Street and progresses north to Queen Street, east to Fairfax Street, south to King Street, and west to terminate in front of City Hall,” the report said. “For the best views, spread out along the one-mile parade route.”

The parade is the centerpiece of a broader weekend of holiday activities, including the Alexandria Holiday Boat Parade of Lights on Saturday afternoon starting at 5:30 p.m.

“The Alexandria Scottish Christmas Walk Parade is produced by Visit Alexandria through a new partnership with Campagna Center and the City of Alexandria,” the release said. “The weekend kicks off on Friday, December 2 with the Campagna Center’s Taste of Scotland, a festive cocktail party at the Torpedo Factory Art Center featuring whiskey-tasting stations, hors d’oeuvres, beer and wine bars and a custom art exhibit.”

END_OF_DOCUMENT_TOKEN_TO_BE_REPLACED

High School Senior Anxious about College Life? Our amazing graduate interns, Meghan Damminger and Kelly Charwat are starting an affordable College Readiness group in early 2023. Working out day and time. Please email h[email protected] to set up a free consultation after the Thanksgiving holiday. And yes, Meghan and Kelly have a few openings for individual clients as well. Their rate is $45 per session. [www.sarahmoorelpc.com](http://www.sarahmoorelpc.com/?fbclid=IwAR3ZlfQnSLVRCc78HbTZutDYZErTctC_5pl- zt4eo_wjQo1gF6uHS–k32g).